Published by
Dominique Petruzzi,
May 19, 2022
Flavor and fragrance (F&F) consist of tastes and scents which are used in a wide variety of consumer goods. These components can be natural or artificial and can be found in both food and non-food products, like beverages or personal care items. The value of the global flavor and fragrance market amounted to some 35 billion U.S. dollars in 2019 and reached around 37.5 billion two years later. In 2021, the flavor division generated almost 20 billion euros, making it the division with the highest market value. Fragrance came in second, while aroma molecules and cosmetic ingredients made up the smallest division. In the United States, prestige fragrance beauty products recently experienced a remarkable increase in sales growth, that is by around 50 percent.

Several big names can be found within the global flavors and fragrances industry. As of the year 2021, Givaudan, IFF (International Flavors & Fragrances), Symrise, and Firmenich were the “four giants” that accounted for over 50 percent of the global F&F market. Givaudan, a Swiss-based F&F manufacturer, has seen a major increase in its total group sales over the past few years, generating approximately 6.7 billion Swiss francs in 2021, of which the majority came from the sale of fragrances. In the same period, the German company Symrise AG reached over 3.8 billion euros in global sales. Its most successful segment proved to be Taste, Nutrition & Health.

With a global market size of roughly 19 percent, International Flavor & Fragrances Inc., a.k.a. IFF, can be considered the leading player on the flavor and fragrance market. The American company, founded in 1958 and currently headquartered in New York, recently saw a remarkable spike in its global net sales, which reached over 11 billion U.S. dollars in 2021. Most of these sales came from the EMEA region and North America. Another impressive increase could be observed in the company’s total number of employees worldwide, which grew from around 13,700 in 2020 to roughly 24,000 in the following year.

In the following 4 chapters, you will quickly find the 26 most important statistics relating to "Flavor and fragrances market worldwide". 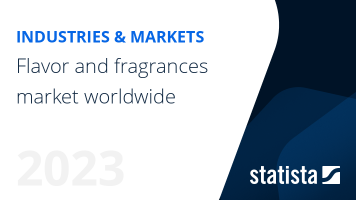 The most important key figures provide you with a compact summary of the topic of "Flavor and fragrances market worldwide" and take you straight to the corresponding statistics.

Cosmetics in the Asia-Pacific region