Published by Lucía Fernández, Jul 6, 2021
Monsanto was an agricultural biotechnology and agrochemical company that was acquired by Bayer. The acquisition was finalized on June 7, 2018. The company was headquartered in St. Louis, Missouri, United States and employed about 20,500 regular employees as of August 2017.

Their portfolio included agricultural seeds and genomics and crop protection chemicals. The seeds segment included seeds which were herbicide- or insect-tolerant. The company delivered either genetically modified crops (GM crops), or in countries where the modification of plants is not adopted, Monsanto sells conventional, non-GM plants. Monsanto also developed Roundup, which is a widely used glyphosate-based herbicide.

In comparison to other globally operating agribusiness firms, Monsanto came first based on generated seed and pesticide sales in 2016. Based on their fiscal year 2017, Monsanto recorded net sales of about 14.6 billion U.S. dollars. In conjunction with Bayer, Monsanto had the largest market share in the global herbicides industry as of 2016, with a 34 percent share of the herbicide market worldwide.

In September 2016, Bayer finalized a deal worth 66 billion U.S. dollars to take over Monsanto. At that point in time, it was the largest all-cash company buyout in history, with a value six billion dollars higher than the previous world record. Bayer and Monsanto became one of the largest agriculture conglomerates in the world following the completion of the acquisition.

In the following 4 chapters, you will quickly find the 20 most important statistics relating to "Monsanto".

The most important key figures provide you with a compact summary of the topic of "Monsanto" and take you straight to the corresponding statistics. 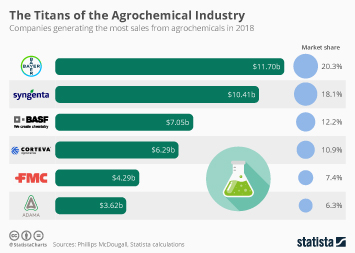 The Titans of the Agrochemical Industry