Private wealth management has developed significantly in the recent years as a result of growth of affluence worldwide. The number of millionaires in North America more than doubled between 2010 and 2020. A similar trend can be observed in Asia-Pacific and Europe. The recent developments in Fintech market help to open up new Private Wealth Management products and services to people with smaller amounts of disposable income as shown in our Statista Report 2020.
How is wealth distributed globally?
The largest amount of global private wealth was concentrated in North America, followed by Europe and Asia. However, the value of private wealth in Asia is rising more rapidly and is likely to overtake western Europe in the near future. China plays a significant role in this trend and was home to the highest number of ultra high net worth individuals in 2020. In the United States, New Jersey had the highest ratio of millionaire households in 2020. Meanwhile, Mississippi had the lowest ratio of millionaire households per capita, where only four percent of households held assets worth more than one million U.S. dollars.

Wealth management companies
The largest private bank worldwide with highest amount of assets under management in 2019 was UBS. Although fintech solutions are increasingly used in the financial world, UBS discontinued their robo-advisor - SmartWealth - in 2018. CRM tools and performance reporting were seen as more valuable than robo-advisors by U.S. registered investment advisors in 2020.
This text provides general information. Statista assumes no liability for the information given being complete or correct. Due to varying update cycles, statistics can display more up-to-date data than referenced in the text.
Published by Statista Research Department, Jan 24, 2023

Number of billionaires worldwide who inherited their wealth
338

Share of ultra wealthy individuals who were self-made worldwide
72.5%

Cities with the highest number of UHNW individuals worldwide 2020

Wealth management in the U.S. 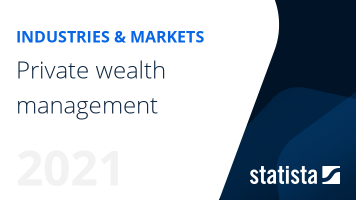 The most important key figures provide you with a compact summary of the topic of "Private wealth management" and take you straight to the corresponding statistics.

Wealth distribution in the United States