Members of Parliament of the United Kingdom - Statistics & Facts

As the alleged details of the latest scandal embroiling Members of Parliament comes to the surface, resulting in the very public suspension of, and investigation into, two key figures in government, questions are again being raised about the corruption and greed of some MPs. In a time of recession when wages have stagnated, the controversy of MPs, their salaries and their expenses has been seen by some as a betrayal of their power, and proof that they are not concerned with the daily lives of ordinary people.
The MPs’ expenses scandal was first broken by the Telegraph group in 2009. Amid the incredulity and disbelief of the British population, the scale of abuse by some Members of Parliament of the system that they were meant to be working for was becoming apparent – notorious examples of which include claims for a floating duck house and moat-clearing costs, as well as spending millions of tax payers’ money with the second home allowance. In the months and years that followed, the casualties piled up, including senior figures from all sides of government, such as the former Speaker of the House of Commons. It seemed like the public’s faith in the very people who were supposed to be representing their interests was at rock bottom. In the following year, 2010, no party won a clear majority in the General Election. The Coalition Government, formed between the Conservative Party and the Liberal Democrat Party took charge of the country.

Post-scandal, expenses are more tightly regulated by independent body the Independent Parliamentary Standards Authority (IPSA). In the fiscal year 2013/2014, 78 percent of expenses were spent on staffing, with a further 7 percent spent on accommodation, and 4 percent on travel. Each and every claim that was made can be found on IPSA’s website. The total cost of approved accommodation expenses claims for all MPs in 2013/2014 was 6.99 million British pounds. For travel expenses the approved amount was 4.8 million.

Since April 2010, IPSA has also had the responsibility of setting MPs’ salaries. Results of a leaked private poll commissioned by the independent body in 2013 show that, with an annual salary of 65,738 British pounds, six in ten MPs felt that they were underpaid. At this point, MPs’ salaries had remained frozen since April 1, 2010, in an attempt, it has been alleged, to break the tide of public fury in the wake of the continuing expenses scandal. However, as of April 2013, MPs’ salaries rose for two consecutive years, before a further increase that is scheduled to take effect after the General Election of May 2015. In September 2014 amidst heavy media criticism, IPSA decided on implementing a new plan post election, described on their website as a “modern, professional package.” MPs' salaries will rise from 67,060 British pounds to 74,000 British pounds per year, and subsequently will be “indexed to changes in average earnings in the whole economy.”

In the run up to the General Election, both sides are under pressure to stem the flow of perceived corruption in their parties. The latest “Cash for access” scandal is just the tip of the iceberg, as already new revelations have come to light of extra-parliamentary work, including some MPs who work as much as 1,954 hours outside their parliamentary duties. Without taking holidays into account, 1,954 hours per year works out as 37.6 hours per week, or a full-time job. 77 percent of people believe that politicians should have to undergo regular ethics and standards training, although 62 percent feel that politicians are no worse today than they were in the past, they are just under higher media scrutiny, so their misdeeds are more likely to come to light. Either way, all eyes are on Westminster, ready for the result of May 7.
This text provides general information. Statista assumes no liability for the information given being complete or correct. Due to varying update cycles, statistics can display more up-to-date data than referenced in the text.
Published by Statista Research Department, Sep 10, 2021

Total cost of basic salaries of Members of Parliament (MPs) in the United Kingdom (UK) in 2014
42.8m GBP

Total amount of accommodation expenses paid to Members of Parliament (MPs) in the UK in 2014
6.99m GBP 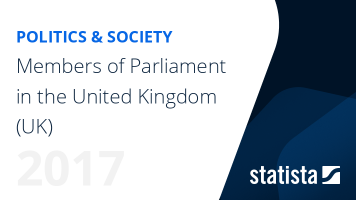 The most important key figures provide you with a compact summary of the topic of "UK Members of Parliament (MPs)" and take you straight to the corresponding statistics.