Published by Statista Research Department, Jul 5, 2022
PwC, which stands for PricewaterhouseCoopers, is a multinational accounting and auditing firm headquartered in London, England. The origins of the firm date back to the 1800’s with the formation of the accountancy firms Price Waterhouse & Co. and Coopers Brothers. In 1998, the two companies, then named Coopers & Lybrand and Price Waterhouse, merged to form PwC. Today the firm operates in over 155 countries and employs over 284,000 people worldwide.
PwC is part of the Big Four accounting firms, along with Deloitte, Ernst & Young (EY), and KPMG. The Big Four are the leading accounting and audit firms in the world and they reported a combined revenues of over 157 billion U.S. dollars in 2020. As of 2020, PwC had the second largest worldwide revenue of the Big Four, narrowly behind Deloitte which made around 4.6 billion U.S. dollars more during that year. PwC increased its revenue year-on-year. Over the last decade, the company’s annual revenue grew by around 16.3 billion U.S. dollars.

The three main service lines of PwC are assurance, advisory and tax services. Assurance, the purpose of which is to provide or improve on information or context for a client so that they can make more informed decisions, was PwC’s largest service line in terms of revenue since 2010. In 2020, the assurance services generated almost 17.6 billion U.S. dollars for PwC. Advisory services, which provides advice to current and future businesses on client potential and business opportunity, was the second largest service line for PwC in that year. Advisory has also been the fastest growing business sector, between 2010 and 2020 the revenue more than doubled from 6.2 billion U.S. dollars to almost 14.7 billion U.S. dollars. Tax services made the smallest portion of PwC’s revenue in 2020, having generated 10.75 billion U.S. dollars.

In the following 4 chapters, you will quickly find the 21 most important statistics relating to "PwC ".

The most important key figures provide you with a compact summary of the topic of "PwC " and take you straight to the corresponding statistics.

Accounting industry in the U.S. 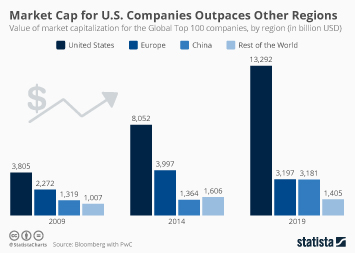