Published by
Madhumitha Jaganmohan,
Mar 14, 2022
First Solar is a manufacturer of low-cost, thin-film solar panels, developer of large-scale solar farms and operations and maintenance service provider. The United States-based company was established out of Solar Cells, Inc. and rebranded as First Solar, Inc. in 1999. It began producing commercial products in 2002 and in the 2010’s became one of the largest solar manufacturers and the largest solar contractor in the world.

In 2019, First Solar ranked third in a list of largest companies within the solar industry. Next to Canadian-Chinese Canadian Solar, the company featured along with SunPower as the leading market leaders with headquarters in the United States. In fiscal year 2021, First Solar recorded an operating income of 586.7 million U.S. dollars. It was after the fourth year since 2017 that the company had seen a profit in annual operating income. Uncertainty over expiration of government subsidies, tax incentives, and other financial support for renewable energy adoption greatly shape First Solar’s performance. This is particularly true for large markets such as the United States, Japan, France, and India, which are among First Solar’s main sales regions. Nevertheless, it was valued at over nine billion U.S. dollars in August 2021, making it one of the leading solar firms by market capitalization.

First Solar primarily manufactures cadmium telluride-based photovoltaic modules and has created new technologies that have broken several solar efficiency records. The company continues to invest heavily in research and development to further increase the efficiency of the company’s thin film module technologies. Cadmium telluride solar cells are a type of thin-film solar cell and manufactured by First Solar using 30 different types of raw materials. In order to reduce its waste footprint, the company became the first within the industry to introduce a module collection and recycling program.

In the following 4 chapters, you will quickly find the 22 most important statistics relating to "First Solar". 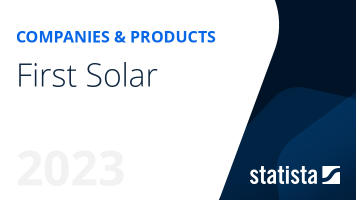 The most important key figures provide you with a compact summary of the topic of "First Solar" and take you straight to the corresponding statistics.