Published by
Madhumitha Jaganmohan,
Sep 21, 2021
The U.S. conducted some of the earliest research on both solar PV and concentrated solar power technologies, for example, the first silicon solar cell was created in the United States. Solar photovoltaics converts light directly from the sun into electricity. Solar energy is actually one of the most abundant energy resources in the world.

The United States has one of the largest solar photovoltaic (PV) markets in the world. The potential for using solar energy ranges widely across the country as southern states like California and Arizona have a much higher direct solar irradiance than other regions, which is largely mirrored by the installed solar PV capacity in the United States. In addition to having better solar resources, southwestern states also have higher solar capacity factors. Capacity factor is a measurement based on a plant’s electricity generation as a percentage of its summer capacity value.

Demand for solar is higher than ever as consumers continue moving away from traditional sources of energy. The falling price of solar energy make it an economically beneficial choice for both commercial and residential owners. Several states continue to encourage solar installations through various solar policies. Many systems use net metering which will provide any extra electricity generated during the day for use by the grid in the evenings. The improved ability for new solar technologies to capture more energy has also made solar PV energy more economically feasible. The performance of solar power plants is generally determined by solar resource quality, tracking capabilities, and inverter-sizes.

In the following 5 chapters, you will quickly find the 25 most important statistics relating to "U.S. solar photovoltaics".

The most important key figures provide you with a compact summary of the topic of "U.S. solar photovoltaics" and take you straight to the corresponding statistics.

Electricity from solar energy in the U.S.

Wind power in the U.S.

Geothermal energy in the U.S. 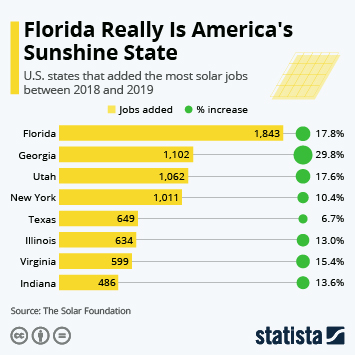 States adding the most solar jobs