Published by Statista Research Department, Apr 29, 2019
In the United States electoral system, primaries and caucuses are elections intended to decide each party’s nominee for the election of the President of the United States. They take place in all 50 states, the District of Columbia and U.S. territories, usually between late January and mid June of the election year. Some of the most important such electoral events are considered the Iowa caucuses and the New Hampshire primaries, which are the first to take place and usually garner a lot of media attention. Another notable event in the early stages of the presidential elections is the so-called Super Tuesday, when the greatest number of states organizes elections to select delegates to national conventions, where each party's presidential candidates are nominated.
Rumors regarding possible Democratic candidates in the 2016 presidential elections began immediately after the 2012 elections, when incumbent president Barack Obama ran largely unchallenged for the party nomination and went on to win a second term. In fact, a possible candidacy of former Secretary of State and New York Senator Hillary Clinton has been anticipated since her 2008 defeat in the nomination race to then-Illinois Senator Barack Obama. Clinton, who has also been a First Lady of the United States during the two terms as President of her husband, Bill Clinton, was scoring high in midterm exit polls and made her official announcement in April 2015. Other major candidates for the Democratic nomination include former Rhode Island Governor Lincoln Chafee, Harvard Professor Lawrence Lessig, former United States Senator Jim Webb, Former Maryland Governor Martin O’Malley and Vermont Senator Bernie Sanders.

Ahead of the Iowa caucus, which took place on February 1, 2016, only three of the major candidates were left on the ballot, namely Clinton, Sanders and O’Malley, with Chafee, Lessig and Webb having already retreated. The caucus results showed Hillary beat Bernie by a very small margin, 49.8 percent versus 49.6 percent of the votes, and effectively pushed O’Malley out of the competition. Simultaneously, polls started showing Sanders, whose progressive stances on social issues have made him extremely popular especially among younger Democrat voters, gain an advantage over Clinton in the subsequent primaries.

The February 9 New Hampshire primary elections have shown the predictions to be true, with Bernie Sanders declaring a sweeping victory in front of his competitor – more than 60 percent of the votes, compared to Hillary’s 38 percent. The following Democratic primaries are set to take place in Nevada on February 20 and South Carolina on February 27.

The most important key figures provide you with a compact summary of the topic of "2016 Democratic Party primaries " and take you straight to the corresponding statistics. 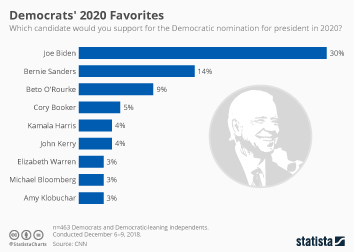