Published by Statista Research Department, Sep 30, 2022
The United States presidential election occurred on Tuesday, November 8, 2016. In an upset that stunned the world, Donald Trump was elected the 45th President of the United States. Preliminary results show Trump winning 290 votes to Clinton’s 232. Preliminary results also project Clinton narrowly winning the popular vote with 61.03 million votes to Trump’s 60.37 million. This is only the fifth time in U.S. history that a candidate has won the popular vote and lost the Electoral College.
Donald Trump secured the Republican nomination on July 19, 2016, defeating Ted Cruz, Marco Rubio, and John Kasich along the way. He surpassed the 1,237 delegates needed to win the nomination, taking 1,542 votes.

Both parties' candidates received a "convention bounce" following their party’s convention, with Hillary Clinton exiting the conventions with nearly an 8-point lead over Donald Trump. As of November 7, Clinton’s lead had narrowed to only 3.2 percent nationally. During this time many states that had seemed likely to vote in Clinton’s favor had narrowed enough that as of November 7, RealClearPolitics had 171 Electoral College votes designated as a toss-up between Clinton and Trump. These include valuable electoral states that Obama won in 2008 and 2012, like Michigan, Ohio and Pennsylvania. At the time of publication, Trump had won Ohio and Pennsylvania while Michigan was still in contention.

One reason for such a tight race may have been both candidates’ unprecedentedly low favorability numbers. Trump and Clinton rank as numbers one and two in unfavorability ratings of presidential nominees since 1956. As of November 7, Clinton and Trump were found to be unfavorable by 54.4 and 58.5 percent of people respectively.

Spending and fundraising were ramped up by both candidates towards the end of the election, but the Clinton campaign consistently outpaced Trump, raising nearly 60 million U.S. dollars in August, compared to the Trump campaign’s 41 million. While Clinton has not been able to match Obama’s record fundraising with small donors, she has received 150 million U.S. dollars from donations under 200 dollars, triple the amount Trump has raised thus far.

The Democrats also lead when it came to advertising. As of August 18, Clinton had aired 309,992 ads promoting her campaign; double that of Donald Trump’s campaign at 114,534 airings.

Groups outside the official campaigns, such as Super PACs, continued to have a growing role in the election cycle. As of August 1, outside groups had sponsored over 32 percent of political ads for 2016 federal elections in the U.S., double the percentage in 2010, the year of the historic Citizens United v. FEC Supreme Court ruling.

As of September 22, outside groups had spent over 755 million U.S. dollars during the 2016 election cycle. This puts 2016 on track to have the highest spending by outside groups to date. The vast majority of spending is being done by Super PACs, groups who may not coordinate with a candidate’s campaign but may raise and spend unlimited amounts of money to advocate for or discourage the election of a candidate.

In the following 4 chapters, you will quickly find the 33 most important statistics relating to "2016 Election". 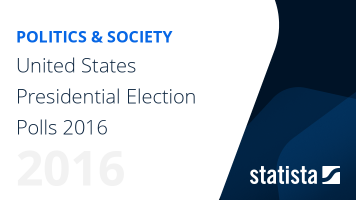 The most important key figures provide you with a compact summary of the topic of "2016 Election" and take you straight to the corresponding statistics. 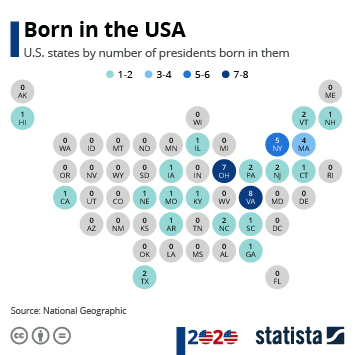 Where Were U.S. Presidents Born? 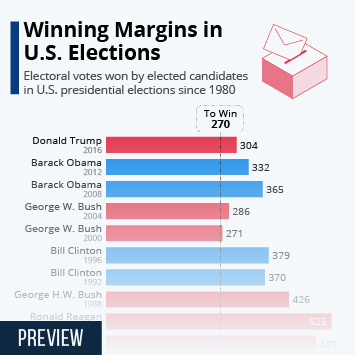