Published by N. Sönnichsen, Mar 11, 2022
Natural gas is a type of fossil fuel that mainly consists of methane gas and other flammable hydrocarbons. It is formed over the span of millions of years from plant and animal remains, as well as sand and silt, that have built up under heat and pressure. This process also forms other types of fossil fuels such as coal and oil. In the case of natural gas, the byproduct of this process has moved into large cracks and spaces within rock layers and can also be found in tiny pores within sedimentary rock formations (the latter of which is known as shale gas). Accordingly, this energy source is found in reservoirs underneath the Earth's surface, with the greatest proved reserves found in the Middle East.

Use and demand growth in the past decades

Natural gas has a wide range of uses. It is a primary source for heating and electricity generation and a major feedstock for chemical products such as fertilizers and plastics. Due to it having a lower carbon content than other fossil fuels, natural gas advocates have promoted its use as a bridge fuel in the energy transition. As a result, governments of large-scale energy consumers such as Germany and the United States are building up gas-fired power capacity to reduce reliance on coal. This growth in demand is also reflected by the steady increase in global natural gas production, which rose by nearly 60 percent between the late 1990s and 2020. Global natural gas consumption closely mirrors production levels, and in 2020 amounted to 3.82 trillion cubic meters.

The U.S. is the world's largest natural gas producer, having extracted nearly 950 billion cubic meters in 2020. It is also the top exporter of gaseous state natural gas, shipping gas via pipelines to neighboring Canada and Mexico.

Costs for purchasing this commodity tend to be lower in producer countries. This is particularly noticeable when comparing monthly natural gas prices in the U.S. and Europe. Europeans often pay twice as much for natural gas as U.S. residents, with the gap having increased tremendously since an energy supply shortage gripped multiple economies in the latter half of 2021. The eyewatering surge in fuel prices, which was later exacerbated by the Russia-Ukraine war, has put natural gas dependence under greater scrutiny.

In the following 7 chapters, you will quickly find the 28 most important statistics relating to "Global natural gas industry".

The most important key figures provide you with a compact summary of the topic of "Global natural gas industry" and take you straight to the corresponding statistics. 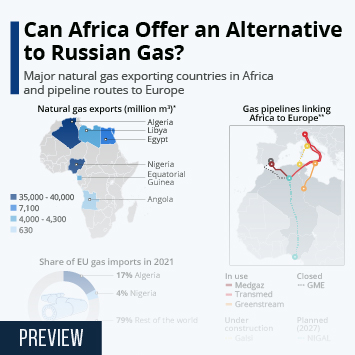 africa an alternative to russian gas