Golf is one of the more popular sports across the United Kingdom (UK). In all of Europe, England has the highest number of registered golf courses as of 2017 by far, with a total of 1,872, followed by Germany with 731, not even half that number. Scotland hosts 560 courses, Ireland has 405 and Wales has 145 courses. Noticeably, compared to other nations, the number of golf courses appears to decrease slowly in all UK countries.
When it comes to the number of registered golf players, England is also ahead in all of Europe, with approximately 656 thousand players, ever so slightly ahead of Germany with roughly 645 thousand registered golfers. Scotland has 188 thousand and Ireland, while Wales have 183 thousand and 45 thousand registered golfers respectively.

Golf participation in England holds rather steady at 946 thousand people who play at least twice a month at any intesity or duration. Participation in Scotland decreased over the past decade, from nine percent of the population playing golf at least once a month in 2007, to only five percent in 2017. The majority of those five percent seem to be rather evenly spread across all age groups. In Northern Ireland, playing golf is almost as popular as playing football and the majority of golfers are male adults, at roughly 69 percent.
This text provides general information. Statista assumes no liability for the information given being complete or correct. Due to varying update cycles, statistics can display more up-to-date data than referenced in the text.
Published by Statista Research Department, Nov 16, 2020

Proportion of registered golfers who are male adults in Wales
80% 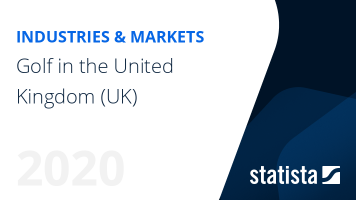 The most important key figures provide you with a compact summary of the topic of "Golf in the United Kingdom (UK)" and take you straight to the corresponding statistics.