Europe has the second largest share of organic agricultural land in the world, only behind Oceania. Even though sales are booming, the state of organic production is yet to catch up with demand: organic farmland as a proportion of all farmland area rarely exceeds 15 percent in most European countries. Liechtenstein has the largest portion of organic farmable area in Europe, with over 40 percent. Area for organic agriculture is steadily increasing, with 17.1 million hectares of farmable land in 2020.

Germany and France have the highest retail sales for organic agricultural products in Europe, with about 15 and 12.7 billion Euros in sales, respectively. Denmark has the highest share of organic retail sales, followed by Austria and Switzerland. Since 2013, the UK has seen a large amount of retail growth in organic food and is projected to reach a retail value of over 927 million British pounds in 2022.

Although Germany has the largest organic market, the highest levels of per capita consumption can be found in Switzerland and Denmark. The average per capita expenditure in the European Union is about 102 euros. Among European consumers, some popular reasons for buying organic foods include supporting local business, health reasons, and to avoid pesticides or other sprays, among others. Although many consumers want to support organic, they might not be willing to tolerate higher price tags. The majority of respondents were likely to pay about five percent more for organic foods. However, only about 14 percent reported a willingness to pay more than ten percent extra for organic products.
This text provides general information. Statista assumes no liability for the information given being complete or correct. Due to varying update cycles, statistics can display more up-to-date data than referenced in the text.

European Union and Europe: organic retail sales value from 2004 to 2020

Organic farmland area in Europe in 2020, by country

European Union and Europe: organic retail sales value from 2004 to 2020

Organic food: per capita spending in selected countries in Europe 2020 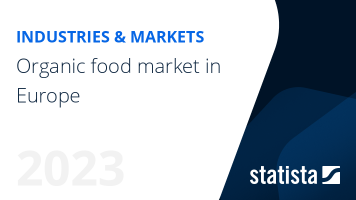 The most important key figures provide you with a compact summary of the topic of "Organic food market in Europe" and take you straight to the corresponding statistics.