Published by Statista Research Department, Jun 22, 2022
Organic foods are foods that are produced using methods that do not involve modern synthetic inputs such as pesticides and chemical fertilizers. Global sales of organic foods amounted to just about 121 billion U.S. dollars in 2020. In that year, North America was responsible for the largest share of retail sales with the United States being the biggest single consumer market.

A recent survey discovered that only 15 percent of Americans do not fill their shopping carts with organic food. Individual spending is increasing as well. In 2021, the per capita spending on organic packaged food and beverages was just over 70 U.S. dollars per person, almost 20 dollars more than in 2017. It is forecast that by 2025, the consumption value of organic beverages will be approximately 2.8 billion dollars. However, organic packaged food is in ever higher demand and the forecast consumption value for 2025 exceeds 25 billion U.S. dollars.

In the following 4 chapters, you will quickly find the 25 most important statistics relating to "Organic food market in the U.S. ".

The most important key figures provide you with a compact summary of the topic of "Organic food market in the U.S. " and take you straight to the corresponding statistics. 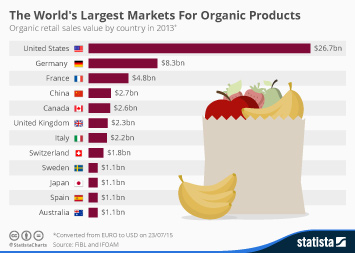