Broadband in the UK - Statistics & Facts

The broadband market in the United Kingdom (UK) is a major part of the UK’s telecommunications industry, directly reaching 82 percent of the population. Consisting of fixed-line and mobile broadband, 73 percent of fixed-line connections offer headline speeds above 30 Megabits per second (Mbps). Broadband services are often bundled with other telecommunications services such as fixed and mobile telephony, and extras such as premium television channels. In 2019, the average household monthly spend on fixed voice and data including broadband reached 37.25 British pounds, and 40.25 British pounds for mobile data and voice services.

BT, Sky, and Virgin Media sit atop the UK’s fixed broadband market, together accounting for 77 percent of the market.
Mobile broadband is also important in keeping people connected across the UK, with approximately 4.41 million mobile broadband subscribers in the UK as of the first quarter of 2020. Overall revenue from mobile data services reached 1.73 billion British Pounds in 2019, down from a high of 2.65 billion British pounds in 2013. Given that mobile data traffic has increased ten-fold in this time, lower revenue in this sector indicates mobile telecommunications is becoming cheaper for consumers.

Makeup of the market

The UK broadband market consists mostly of large corporations – including BT, Telefónica, Sky, and Virgin Media, and TalkTalk Group – and some smaller providers. BT hold the largest share of the fixed broadband market with a 34 percent share. The company also has more mobile subscribers than any other provider with a 28 percent share of the subscriber base as of 2018.

Looking ahead: connections to increase

As more day-to-day functions move online, the importance of having a fast and reliable internet connection grows. The number of connections is expected to rise in the coming years, across mobile and fixed connections.

The overall internet penetration rate in the UK is expected to climb from 93.67 percent in 2020, to 95.7 percent by 2025. The number of mobile broadband connections per 100 inhabitants in the United Kingdom exceeded 100 for the first time in 2019, and by 2025 is expected to reach 122.47 connections for every 100 inhabitants.
This text provides general information. Statista assumes no liability for the information given being complete or correct. Due to varying update cycles, statistics can display more up-to-date data than referenced in the text.
Published by Statista Research Department, Feb 7, 2022

Mobile broadband penetration in the UK in 2021
3%

Market share of telecoms operators in the UK 2007-2021, by broadband subscribers 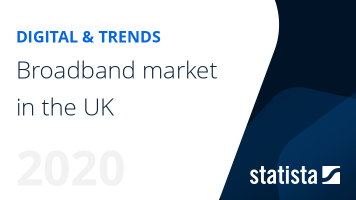 Go to report Broadband market in the UK
Top Seller

The most important key figures provide you with a compact summary of the topic of "Broadband in the UK" and take you straight to the corresponding statistics.