Within the mobile industry, there are different technologies which are directly related to both network and broadband access. Today the most widely used mobile broadband technology is LTE (4G). In 2019, 52 percent of all mobile broadband connections worldwide are using the LTE (4G) technology. The rollout of 5G – the next generation of mobile broadband technology – is also well underway, with spectrum auctions complete in several major markets, and 5G handsets appearing on the market. By 2025, it is expected there will be around 745 million 5G connections across North America and Europe, up from just 22 million in 2020.
This text provides general information. Statista assumes no liability for the information given being complete or correct. Due to varying update cycles, statistics can display more up-to-date data than referenced in the text.
Published by Statista Research Department, Oct 27, 2022

Number of mobile subscriptions in the Americas
1.2bn 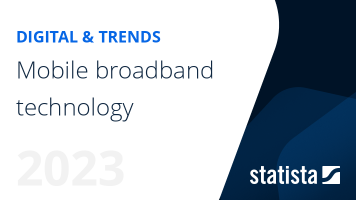 The most important key figures provide you with a compact summary of the topic of "Mobile broadband technology" and take you straight to the corresponding statistics.