Charities in the UK - Statistics & Facts

As of March 2021 the charity with the highest annual income was The British Council, with revenues of over one billion British pounds. In terms of employment size, the biggest charities were Islamic Centre Edgware, followed by Sheffield African Caribbean Mental Health Association at 47.4 thousand and 36.5 thousand employees respectively. The top-ranking charities with the most volunteers were Parkrun Global Limited and Rhyl & District Musical Theatre Company with 279 thousand and 251 thousand volunteers respectively. The charity with the highest charitable spending was the British Council, with an expenditure of over one billion British pounds.

Telethons in the UK

One of the most effective ways of raising money for charity has been through telethons, and in the United Kingdom is no different in this regard. The annual Children in Need charity of the BBC for example has raised over one billion pounds since it's inception in 1980, while the bi-annual comic relief or 'red nose day' event has also raised significant amounts for charity. Due to a changing media landscape which has seen TV viewing time decline in recent years, the amount raised during telethons has declined, with Red Nose Day in 2019 raising 63.55 million British pounds, compared with 108.4 million in 2011.

In the following 4 chapters, you will quickly find the 21 most important statistics relating to "Charities in the UK".

Statistics on the topic
Number of charities in England and Wales
170,383
Amount raised for Children in Need in 2021
39m GBP
Average amount people given to charities per month
24 GBP

The most important key figures provide you with a compact summary of the topic of "Charities in the UK" and take you straight to the corresponding statistics. 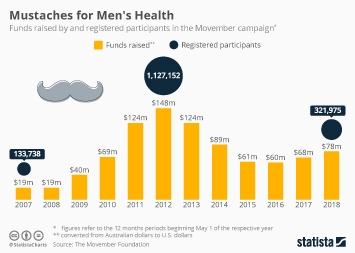 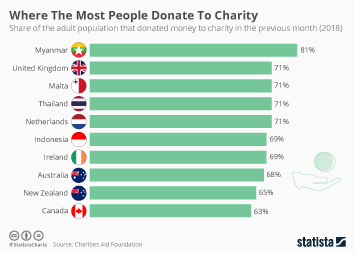 The Most Generous Countries in the World