Terrorism wave of the mid 2010s

In terms of fatalities, four of the ten worst terrorist attacks in Europe since 1980 took place between 2015 and 2017. The worst of these were the November Attacks in Paris in 2015, where gunmen directed by ISIS murdered 130 people at various sites throughout the French capital. This single attack had a higher death toll than the overall number of terrorist fatalities in the whole of Europe between 2010 and 2014. The Paris attacks were followed by various other atrocities in Europe that were inspired by ISIS, with the deadliest examples being Nice and Brussels in 2016, followed by the Manchester Arena bombing in 2017. The attack in Nice in particular highlighted the danger of vehicle attacks to European societies, in that they required little planning, few resources and were often undertaken by a single attacker, or lone-wolf.

The main body responsible for combatting terrorism across Europe is Europol, which has seen both it's budget, and manpower increase significantly to meet the challenge poised by recent waves of terrorism. Europol's budget reached over 193.41 million Euros in 2021, and it's workforce of almost 1,432 is almost double what it was ten years ago. Increasing counterterrorist efforts can also be seen in the number of arrests made for terrorist offences, which peaked in 2019 at over 1.3 thousand, more than double the number made in 2013. In 2019, convicted terrorists in Greece faced the longest prison sentence length in Europe at 20 years.

In the following 4 chapters, you will quickly find the 19 most important statistics relating to "Terrorism in Europe".

The most important key figures provide you with a compact summary of the topic of "Terrorism in Europe" and take you straight to the corresponding statistics.

Terrorism impact on the travel industry in Europe

Terrorism in the Nordics 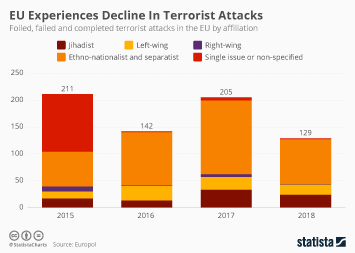 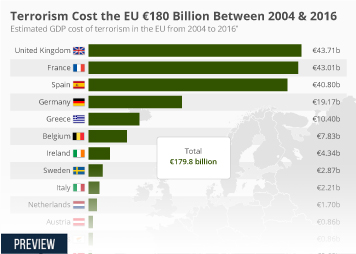