Published by Statista Research Department, Sep 1, 2022
Since the turn of the millennium, few topics have shaped the global discourse as much as terrorism. Following the 9/11 attacks in New York, on September 20, 2001, the U.S. president at the time, George W. Bush, declared a “War on Terror” and sent America to war with Al-Qaeda. The USA first invaded Afghanistan in 2001 to evict the Taliban regime and to chase Osama Bin Laden. Then, two years later, the country invaded Iraq due to highly disputed claims about the regime of Saddam Hussein positing weapons of mass destruction. Many commentators argue that, rather than solve the problem, the War on Terror served only to validate the use of terrorist tactics, and that it threw these countries into further chaos.
There is evidence to support this view. For instance, after the American troops withdrew from Afghanistan after 20 years in the country in 2021, the Taliban quickly regained control of the country. Moreover, it was the country with the highest number of terrorist attacks in 2020, and also the country with the highest number of fatalities due to terrorist attacks. Overall, 2020 saw just over 10,000 terrorist attacks worldwide, and nearly 30,000 fatalities from terrorism.

Generally, terrorism is defined as an unlawful use of violence designed to further political aims by creating fear. This means that it can be difficult to define which violent acts should be classified as terrorism, and cases where the perpetrator does not have a political motivation. Note that although this definition is adequate at a general level, it is too broad to operate as an internationally agreed legal definition. For example, it is not clear on the status of violence in wars of national liberation and self-determination. This lack of universal agreement has hampered the ability of the international community to coordinate efforts to combat terrorism. In 2020, shootings was the most common form of violence used by terrorists, owing to the widely-felt destruction they cause. Consistent with the motive of instilling fear in the public, the most common target of terrorist attacks are private citizens and property.

When did terrorism start?

Terrorism is by no means just a 21st century issue, with attacks that could be described as terrorism dating back as far as the Roman Empire. As for the word ‘terrorism’, its usage emerges from the Reign of Terror during the French Revolution – although the fact that the violence was conducted by the state ironically means it likely does not qualify as terrorism. Turning to more modern times, looking at the number of terror attack victims in Western Europe since 1970 shows more victims in the 1970s and 1980s than in the 2000s. Much of this violence was enacted by nationalist movements such as the IRA or the ETA, as well as political extremists on both the left and right. Moreover, the 1970s and 1980s saw a range of high-profiled plane hijackings, for instance the hijacking of the Landshut between Spain and Germany in 1977, and the hijacking of the Air France flight that was redirected to Entebbe in Uganda in 1976. However, there has been a number of deadly terrorist attacks in Europe since the turn of the millennium, with seven of the 10 deadliest terrorist attacks on the continent happening since 2004.

Terrorism in the 21st century

Two dominant trends shape terrorism in the 21st century. First is the overrepresentation of the Middle East and North Africa in the number of terrorist attacks by region. Together, this region accounted for nearly 50,000 of the terrorist attacks worldwide between 2007 and 2021, more than 10,000 incidents more than in South Asia, where the second highest number of attacks took place. Second is the high high number of attacks by radical Islamists, who are both ideologically religious and aiming for political control of territories in the aforementioned regions. Perhaps the two most infamous such organizations are the Islamic State and the Taliban, who were responsible for a combined 2,300 terrorist attacks in 2020 alone. While the area under the control of the IS diminished during the last years, Taliban was able to regain control of Afghanistan in 2021. Despite these high numbers, such organizations have a relatively small presence in America, with only 10 jihadist terrorists arrested or killed while conducting a terrorist activity in the U.S. in 2022.

Although the number of terrorist attacks in Europe have decreased since 2017, a worrying trend is the increasing presence of terrorist organizations in several African countries. The presence of Al-Shaabab in Somalia has been known over the last decades, but the Islamic State and Al-Qaida are increasing their presence in so-called fragile states such as Burkina Faso, Mali, and Niger. Four of the five countries with the highest number of fatalities caused by terrorist attacks in 2021 are located in Africa. As a result of the instable situation in Mali, the largest United Nations peacekeeping mission, the MINUSMA, is located here.

In the following 5 chapters, you will quickly find the 30 most important statistics relating to "Terrorism".

Statistics on the topic
Number 1 on the Global Terrorism Index
Afghanistan
Number of people killed in terrorist attacks in Afghanistan
8,500
Most active terrorist organization
Taliban

The most important key figures provide you with a compact summary of the topic of "Terrorism" and take you straight to the corresponding statistics.

Terrorism in the Nordics

Terrorism impact on the travel industry in Europe 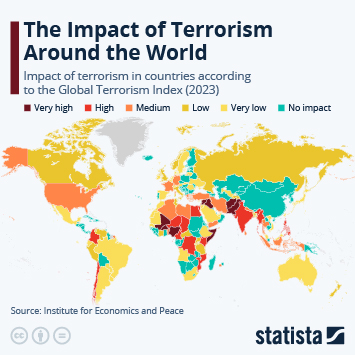 The Impact of Terrorism Around the World 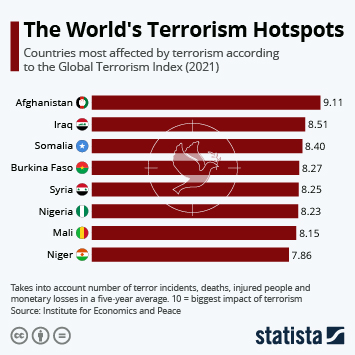