Childcare in the UK - Statistics & Facts

Published by D. Clark, Nov 12, 2021
There were approximately 3.78 million children younger than five years old in the United Kingdom in 2020, which was around 5.6 percent of the population in that year. Among regions of the UK, London had both the highest population of young children in the population at 595.8 thousand, and also the highest proportion at 6.6 percent. During the same year there were slightly more males aged 0-4 than females, while the most common single year of age were four-year-olds, of which there were 807.5 thousand.

The cost of childcare in the United Kingdom varies quite significantly depending on the type of care and by the age of the child being looked after. As of 2021, the average weekly cost of 25 hours of nursery care in Great Britain amounted to 137 British pounds a week for under twos, almost 133 pounds for two-year-olds, and in England around 52 pounds a week for three to four-year olds. Full-time care, measured as being 50 hours a week, obviously cost more, ranging from 263 pounds a week for under twos in Great Britain, to almost 92 pounds for three to four-year olds in England. Childcare in Inner London was a lot more expensive than the rest of the country, with a part-time nursey place for under twos having a weekly cost of almost 180 pounds a week, compared with 115 pounds in Wales.

In the following 4 chapters, you will quickly find the 27 most important statistics relating to "Childcare in the UK".

The most important key figures provide you with a compact summary of the topic of "Childcare in the UK" and take you straight to the corresponding statistics. 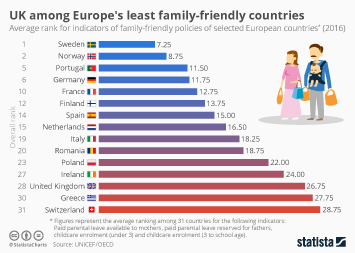