Published by Statista Research Department, Jan 6, 2023
GEDI Gruppo Editoriale, formerly known as Gruppo Editoriale L’Espresso, is an Italian media conglomerate founded in 1955. It operates in the newspaper, magazine, radio, internet, television, and advertising sectors. GEDI Gruppo Editoriale publishes the national daily newspaper La Repubblica, as well as the weekly magazine L'Espresso and a large number of local newspapers. In 2017, the group’s merger with the publishing house Itedi (Italiana Editrice S.p.A.) has created the biggest editorial project in the field of publishing in Italy. By 2020, GEDI Gruppo Editoriale had become the single most important publisher of daily newspapers in Italy in terms of market volume share.
La Repubblica is one of the most read Italian daily newspapers. Printed in Rome, it reaches the national audience in every region of the country and it counts nine local editions. In 2019, more than 86 million copies of the newspaper were distributed in Italy, while La Stampa circulation surpassed 62 million copies. La Stampa, a daily newspaper published in Turin, is one of the oldest newspapers in Italy and is among the most read ones. One of the two most prominent Italian weeklies is also published by the group; L'Espresso is a weekly culture and politics magazine, with an average number of monthly copies sold approaching 218 thousand. GEDI Gruppo Editoriale also has a strong tradition in the production and distribution of local newspapers through its GEDI News Network division. Il Tirreno, Il Messaggero Veneto, and Il Piccolo covering respectively Livorno, Udine, and Trieste, represent the group’s three biggest products of this kind in terms of diffusion.

GEDI Gruppo Editoriale’s reach goes well beyond the printed news industry. The group owns Radio Deejay, the second national radio station in Italy with 5.2 million average daily listeners in 2019, together with Radio Capital and m2o. Moreover, GEDI Gruppo Editoriale has been increasing its online presence by founding the Italian version of the online newspaper The Huffington Post. In a few years, HuffPost has managed to become one of the most used online news sources in Italy. Overall, online content produced by GEDI Gruppo Editoriale reached more than five million unique daily users in July 2020.

In the following 5 chapters, you will quickly find the 36 most important statistics relating to "GEDI Gruppo Editoriale". 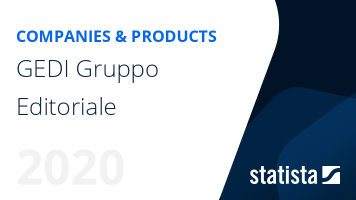 The most important key figures provide you with a compact summary of the topic of "GEDI Gruppo Editoriale" and take you straight to the corresponding statistics.