Wine, an alcoholic beverage produced by fermentation of grapes, is a staple of Italy and Italian culture. In fact, Italy was one of the countries with the highest number of liters consumed, and a per capita consumption of wine second only to Portugal. Wine is suitable for various convivial and social occasions, as a traditional Italian aperitif, for fairs and other special events, or simply for socializing with friends and acquaintances. Most often though, wine is consumed as an accompaniment to a meal. A wide range of wines exist to suit all taste preferences: commonly consumed wines are typically red or white, in their sparkling, semi-sparkling or still versions.

The global wine production market is dominated by Italy, followed by other traditional wine producing countries - France and Spain. More than 50 million hectoliters of wine were produced in the country in 2021, with a quarter of the total production coming from just one region, Veneto. The total area cultivated for wine grape harvesting in Italy amounted to roughly 651 thousand hectares as of 2021. In addition, organic wine production was widespread and growing. In fact, the area devoted to organic viticulture was quite extensive and pronounced in regions such as Sicily and Tuscany.

Given its position as a wine producing country, Italy was also an important wine exporter, especially when looking at regional supplier figures, where Veneto, Piedmont and Tuscany occupied the first three positions. Additionally, in 2021, the leading destination countries for Italian wine exports were the United States, Germany and the United Kingdom.

Additionally, certified wine production was an important segment of the Italian wine industry. Two main certifications exist: Protected Designation of Origin (PDO) and Protected Geographical Indication (PGI), which counted 408 and 118 products as of 2021. At the regional level, Piedmont, Tuscany and Veneto counted the greatest number of PDO and PGI wine products. PDO, particularly with regard to red wines, was the most valued and exported worldwide.
This text provides general information. Statista assumes no liability for the information given being complete or correct. Due to varying update cycles, statistics can display more up-to-date data than referenced in the text.

T. Ozbun
Research expert covering food retail and all food topics for Italy and Brazil
Get in touch with us now
Published by T. Ozbun, Aug 10, 2022

Number of enterprises in the manufacture of wine from grapes in Italy in 2020
1,738

Companies manufacturing wine from grapes in Italy in 2020, by legal form

Export value of wine from Italy 2021, by region 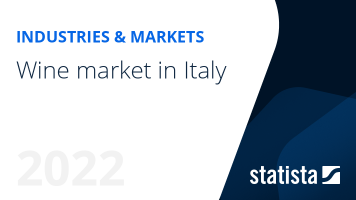 The most important key figures provide you with a compact summary of the topic of "Wine market in Italy" and take you straight to the corresponding statistics.