European countries are among the world’s most prolific wine producers. Three European countries famous for their wine industries, Italy, France and Spain, topped the world’s leading countries in wine production in 2021. The three countries also accounted for a significant share of the global vineyard surface area, largely owing to their Mediterranean climate, which has historically made wine-growing flourish in these areas. Other market leaders in wine production on the European continent include Germany and Portugal. Germany was the fourth largest producer of wine in Europe, with eight million hectoliters of wine produced in 2021. In that year, the size of the European wine market reached nearly 153 billion U.S. dollars and is expected to continue growing to 218 billion U.S. dollars by 2025.

Home to some of the world’s most exquisite wines, European countries were not only among the leading wine-producing countries worldwide, but they also topped the list for the leading exporters of wine globally. More than 11 billion euros worth of French wine was exported to the rest of the world in 2021, making France the world’s top wine exporter based on value that year. While European imports of wine declined sharply in 2020 and 2021, European wine exports grew, increasing from around 15.88 million hectoliters in 2010 to nearly 29 million hectoliters in 2021.

In terms of consumption, France had the highest wine-consuming population among its European peers, and the second largest wine consumption globally after the United States. The French consumed approximately 25.2 million hectoliters of wine in 2021, just ahead of Italians, whose wine consumption volume reached around 24.2 million hectoliters that year.
This text provides general information. Statista assumes no liability for the information given being complete or correct. Due to varying update cycles, statistics can display more up-to-date data than referenced in the text.
Published by Statista Research Department, Jul 15, 2022

Revenue of the wine market in Europe
152.9bn USD

Volume of wine imports in Europe in 2021, by country

Volume of wine exports in Europe in 2021, by country

Wine consumption in Europe in 2021, by country 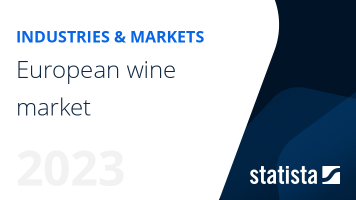 The most important key figures provide you with a compact summary of the topic of "Wine market in Europe" and take you straight to the corresponding statistics.