Published by
Aaron O'Neill,
Apr 22, 2021
Located in north-eastern Africa, and bordering a total of seven countries, Sudan is one of the largest countries in the world, with a total area of roughly 1.86 million square kilometers. Also known as North Sudan, it has an estimated population of about 40 million people - half of Germany's population size -, which is expected to increase significantly by 2020. Although the fertility rate in the country has been on the decline since 2005, it still reports a higher rate than many other countries; in 2015, the fertility rate in Sudan amounted to 4.6 children per woman, whereas France, which was the European country with the highest fertility rate in 2014, reported barely over two children per woman.
Until 1956, Sudan was under Anglo-Egyptian co-rule, and since it has gained its independence, it has been involved in two civil wars. In January 2005, the North/South Comprehensive Peace Agreement was signed, and granted the southern rebels autonomy until January 2011, when a referendum on South Sudan’s independence was held. After almost everyone voted for independence, South Sudan separated from Sudan, and became an independent country in Africa. The Republic of Sudan is a presidential republic and is divided into 18 administrative divisions. Due to its British ruling, English is one of two official languages spoken in Sudan. The other language holding the status of an official language is Arabic.

As a result of losing three-quarters of its oil production after the separation from South Sudan, the country had struggled to regain its fiscal stability. This is mirrored in the state’s GDP growth rate, which finally came out of the red in 2013. In addition to this, as a consequence of the conflicts that were embedded in the country’s social and economical sphere, the high crime rates and an alarming number of terrorist attacks made Sudan quite the unstable player on the political scene.

The services sector accounts for more than half of the country’s GDP, however, Sudan also heavily relies on agricultural production: The agricultural sector, including the production of cotton, sugarcane and bananas, accounts for almost 40 percent of GDP and employs the majority of Sudan's workforce. Sudan's most important export partner are the United Arab Emirates, with about 42.9 percent of all exports. The United Arab Emirates are also Sudan’s most important import partner, with a share of 15.4 percent of imports.

In the following 4 chapters, you will quickly find the 36 most important statistics relating to "Sudan".

The most important key figures provide you with a compact summary of the topic of "Sudan" and take you straight to the corresponding statistics. 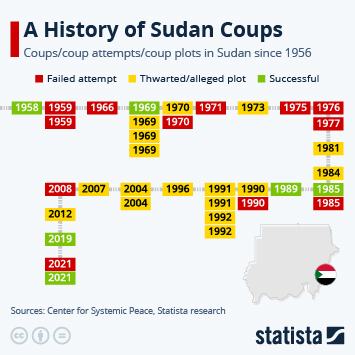