Published by Statista Research Department, Feb 2, 2022
“Our father brought forth, on this continent, a new nation, conceived in liberty, and dedicated to the proposition that all men are created equal”. More than 150 years on from Abraham Lincoln’s now immortal Gettysburg Address, America has witnessed countless people dedicated to that proposition. But in the nation that gave rise to Martin Luther King, Malcolm X, Harvey Milk, and modern incarnations like Janet Mock or Laverne Cox, discrimination persists. Unfortunately, the motivations for hate are as diverse as the people who form the racial, religious, and mixed-gender melting pot that is the United States of America.
When these motivations lead to action from those wielding hate, the result is hate crime. The Federal Bureau of Investigation (FBI) defines a hate crime as “criminal offense against a person or property motivated in whole or in part by an offender’s bias against a race, religion, disability, sexual orientation, ethnicity, gender, or gender identity.” In 2020, there were 6,880 victims of race-based hate crime in the United States, which were committed by about 4,339 different offenders.

The most prominent form of hate crime in the United States is anti-Black or African American hate crime. The reasons for this cultural prominence are two-fold. Firstly, the importance of the Black civil rights movement of the 20th century in many ways laid the foundation for civil rights movements across the United States. Secondly, the statistics show that an America free from racial discrimination remains a distinct possibility. Black or African Americans were the racial group most heavily victimized by hate crimes in 2020, with 3,915 victims compared to White Americans in second place with 1,082 victims. These crimes included intimidation, varying degrees of assault, and destruction of property.

The rise of advocacy for minorities has also coincided with a rise in so-called White nationalism. Those associated with White supremacist or White nationalist groups were responsible for 53 percent of all extremist-related fatalities in 2020. In a survey conducted that same year, more than a third of respondents reported that White nationalism is a very serious threat to the United States. Even more concerning is the belief that the movement consists of more than just a minority of extremists and sympathizers. According to the same survey, 42 percent of respondents believed that former President Donald Trump personally supported the White nationalism movement.

Religious identity is another major motivation for hate crimes in the United States. Jews were the most victimized religious group in 2020, and around 12 Jewish juveniles fell victim to hate crimes in 2020. In a concerning historical trend stretching beyond America, the destruction, damage, and/or vandalism of Jewish properties was the most common form of anti-Jewish hate crimes in 2020.

Finally, hate crimes are also directed at people due to their sexual orientation, gender, or gender identity. Attacks against gay men were the most commonly recorded anti-LGBTQ+ hate crime in 2020 with 673 incidents. That said, the prominence of the gay community does not distract from other smaller communities. 244 transgender people were targeted by hate crimes, as were 58 gender non-conforming people. Moreover, it is disconcerting that 397 anti-LGBTQ+ hate crimes occurred at a residence, suggesting some members of the community are not even provided safety in their own home.

In the following 5 chapters, you will quickly find the 27 most important statistics relating to "Hate crime in the United States".

Statistics on the topic
Number of victims of hate crime
11,472
Number of anti-Black or African American hate crimes
2,871
Number of hate groups in the United States
733

The most important key figures provide you with a compact summary of the topic of "Hate crime in the United States" and take you straight to the corresponding statistics.

Aboriginal crime and justice in Canada 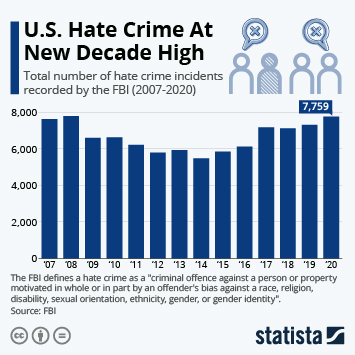 total number of hate crime incidents recorded by the FBI 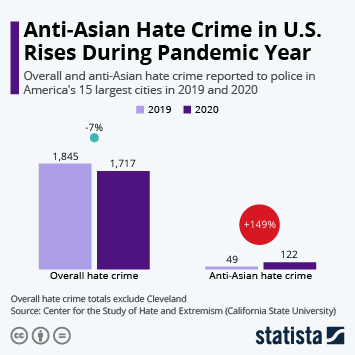