Published by Erin Duffin, Oct 8, 2021
Property crime in the United States incorporates all instances of theft or unlawful destruction of property in the absence of force or threat of force against a victim. As with the rate of violent crime, the property crime rate in the United States has dropped dramatically since 1990. Of the different forms of property crime, larceny-theft is the most common in the U.S. with more than 4.6 million reported cases in 2020. Among such cases, theft of items from motor vehicles is the most common type. Interestingly, survey data shows that although crime rates have continued to drop, a majority of Americans have persistently believed that there was more crime in the current year than the year before.

New Mexico is a hot bed for property crime. The state has one of the highest larceny-theft rates and one of the highest motor vehicle theft rates in the country. In contrast to arson and many violent crimes, people generally seek to commit theft related property crimes because of the expected personal financial gain from committing such crimes. As such, it can be expected that the crime rates will be higher in areas where poverty rates are higher than national averages. The immorality of theft subsides to a perceived necessity for those facing a dire financial situation. Unsurprisingly, New Mexico has one of the highest poverty rates in the United States.

Another potential reason people may choose to commit property crimes is the likelihood of them being caught and therefore charged. A look at the crime clearance rates for different crimes in the United States shows that people are much less likely to be caught when committing property crimes than violent crimes. The crime criminals appear most likely to get away with the most in the United States is motor vehicle theft. Additionally, only 21.5 percent of arsons are cleared through arrest or other exceptional means. Among crimes of arson, it is even more unlikely that someone will be caught for arson of a motor vehicle.

In the following 6 chapters, you will quickly find the 27 most important statistics relating to "Property crime in the U.S.".

The most important key figures provide you with a compact summary of the topic of "Property crime in the U.S." and take you straight to the corresponding statistics. 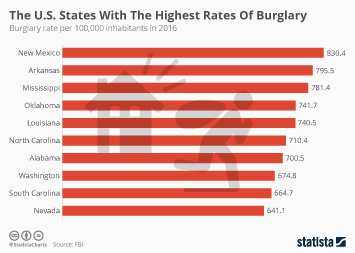 The U.S. States With The Highest Rates Of Burglary