COPD in the U.S. - Statistics & Facts

Published by
John Elflein,
Feb 3, 2021
Chronic Obstructive Pulmonary Disease (COPD) is a lung disease that causes obstructed airflow in the lungs and results in breathing problems. COPD is used to describe such lung diseases as emphysema, chronic bronchitis, and severe asthma. In 2019, COPD was the third leading cause of death worldwide, accounting for around 3.23 million deaths that year.
In the United States, the state of West Virginia had the highest prevalence of COPD in 2017, with almost 14 percent of adults in the state diagnosed with the disease. In comparison, only 3.4 percent of adults in Hawaii were diagnosed with COPD, the lowest rate in the U.S. Rates of COPD are higher among certain demographics, with 11 percent of American Indians/Alaska Natives diagnosed, compared to just 3 percent of Hispanics.

Symptoms of COPD include increased shortness of breath, coughing, tightness in the chest, and wheezing. In 2020, a survey found that 88 percent of individuals with COPD in the U.S. suffered from shortness of breath during everyday activities within the past month, while 70 percent suffered from fatigue. Another survey found that 27 percent of those with COPD felt it was not at all easy to avoid COPD triggers and only 1 percent felt it was very easy. Common COPD triggers include changes in weather, pollen, stress, cleaning products, dust, mold, air pollution, and smoke.

The death rate from COPD among U.S. adults in 2014 was around 142 per 100,000 population for males and 101 per 100,000 for females. Death rates from COPD are significantly higher among adults aged 85 years and older than among young, and even middle-aged, adults. Around half of all COPD-related deaths among adults have COPD as the underlying cause of death, but heart disease and cancer are also the underlying causes in many COPD-related deaths in the U.S. The most common cause of COPD is tobacco smoking, but air pollution and genetics can also play a role. Although the number of tobacco smokers in the U.S. has decreased in recent decades, around 34.1 million people still smoked as of 2019. This is a very large number of people at risk of developing COPD due to a simple, but deadly habit.

In the following 5 chapters, you will quickly find the 34 most important statistics relating to "Chronic Obstructive Pulmonary Disease (COPD) in the U.S.".

Statistics on the topic
Third leading cause of death worldwide
COPD
Number of deaths from COPD worldwide in 2019 (in millions)
3.23m
Value of the COPD therapy market worldwide in 2020-2021
18.7bn USD 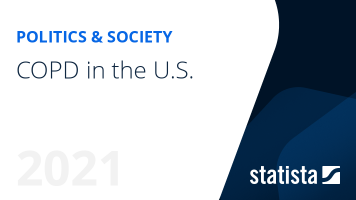 The most important key figures provide you with a compact summary of the topic of "Chronic Obstructive Pulmonary Disease (COPD) in the U.S." and take you straight to the corresponding statistics.

Asthma in the U.S.

Cardiovascular disease in the U.S.