Asthma in the U.S.- Statistics & Facts

Published by Statista Research Department, Mar 23, 2022
Asthma is a chronic disease that affects the airways of the lungs. Asthma can be mild or severe and is caused by genetic and environmental factors. Symptoms of asthma include shortness of breath, tightness or pain in the chest, coughing, and wheezing. In 2019, around 7.8 percent of the population of the United States currently had asthma. Asthma is more common among females and children aged 5 to 14 years.

Medications for asthma include those that treat acute symptoms, as well as medicines which prevent further exacerbation, with some of the most common medications including fluticasone and montelukast. As asthma can be controlled, deaths from asthma are rare with it being the underlying cause of death in about one out of 100,000 population in 2020. Unsurprisngly, just as asthma rates are higher among females, rates of death from asthma are also higher among females than males. The U.S. states with the highest death rates from asthma include Mississippi, Nebraska, and Iowa.

In the following 5 chapters, you will quickly find the 29 most important statistics relating to "Asthma in the U.S.".

Statistics on the topic
Percentage of persons in the U.S. with current asthma
7.8%
Age group with the highest rate of current asthma
5-14yrs
Rate of death with asthma as the underlying cause (per 100,000 population)
1

The most important key figures provide you with a compact summary of the topic of "Asthma in the U.S." and take you straight to the corresponding statistics.

Asthma in the United Kingdom

Children's health in the U.S.

Allergies in the U.S. 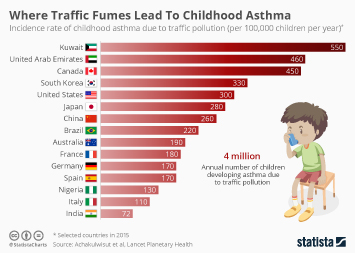 incidence rate of childhood asthma due to traffic pollution