Agriculture, forestry, and fishing were integral parts of the Japanese economy well into the first half of the twentieth century. The agricultural sector continued to function as the largest employer during the post-World War Two years, introducing new technologies, such as mechanized farming, mass crop production, and the usage of chemical fertilizers. In present-day Japan, however, the number of commercial farm households continues to decrease as individuals working within the agricultural industry are aging. One determining factor in the decline of the agricultural sector is the shortage of farmland in Japan, with more and more land being used for housing.

Domestic crop production, with a traditional focus on rice, accounts for the highest output within the agricultural farming sector, while livestock farming only plays a minor role in Japan. Paddy fields are the main form of rice cultivation. Due to a shortage of plain farmland, farmers utilize terraced paddies built into mountain slopes or swampland around the country's coastlines. Rice paddies are vital to Japan's biodiversity, since they serve as ecosystems and water reservoirs, protecting wildlife populations and preventing flooding.
The Japanese archipelago consists of highly forested and mountainous islands, with the habitable zones centered around coastal areas. Despite Japan being densely forested, the forestry sector and the lumber industry are not well developed. Forestry in Japan is often run as a side-business of establishments and individuals active in the farming industry.
As Japan is an island nation surrounded by oceans, people have traditionally taken advantage of the abundant supply of seafood. More than three thousand fishing ports are operated across the country, with marine fisheries showing the highest production output within the fishing industry, followed by marine aquacultures. Inland water fisheries and aquacultures are comparatively minor sub-sectors of the fishing industry, focusing on the production of shellfish and eels.
While Japan is blessed with a rich fauna and flora, it is also vulnerable to natural disasters. Earthquakes, typhoons, or flooding through heavy rainfall regularly cause damages in the agricultural industry. With the intensifying effects of climate change, the impact on the primary sector through natural catastrophes will likely worsen in the future.

How tourism revives the agricultural sector

Agriculture and food-related tourism in Japan is enjoying steady popularity among international, but even more so among domestic travelers. Japan has been looking to revive its decaying rural areas for years, with limited success. Young people are drawn to the country's buzzing metropolitan areas, providing work, convenience, and a desirable, modern lifestyle. A popular mechanism used to promote rural areas is the so-called agritourism. Through tour programs, such as farm stays, visitors get the chance to experience a variety of agricultural activities, from picking fruits and harvesting tea leaves, to making butter and feeding animals. Learning about rural traditions and tasting local delicacies is also a popular feature of Japanese TV shows. Since each Japanese prefecture is renowned for certain agricultural products and dishes, celebrities are regularly filmed traveling the country on the hunt for highlights of regional cuisines.
The Japanese archipelago stretches over several climate zones, allowing the cultivation of a broad spectrum of agricultural products. For example, the northern island Hokkaido is famous for its dairy products, the neighboring Aomori prefecture produces not only the majority, but allegedly also the best apples in the country. While many gourmets around the globe dream of sampling the original Kobe beef, Yamaguchi prefecture's infamous fugu (pufferfish) remains a specialty only for the brave. Through the promotion of farming and rural lifestyle as touristic activities, younger generations are not only reintroduced to an almost forgotten part of the country, but money and attention are put back into sector that struggles to survive.
This text provides general information. Statista assumes no liability for the information given being complete or correct. Due to varying update cycles, statistics can display more up-to-date data than referenced in the text.

Production output of the farming industry in Japan 2014-2020

Production output of the farming industry in Japan 2014-2020 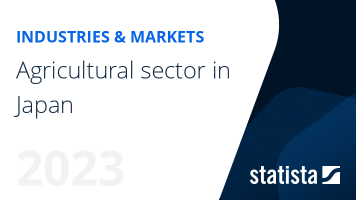 The most important key figures provide you with a compact summary of the topic of "Agriculture in Japan" and take you straight to the corresponding statistics.