Published by
Catharina Klein,
Oct 21, 2022
Once the world’s largest fishing nation, Japan is now on the lower end of the leading ten countries in the fishery and aquaculture sector. How did this happen? After the end of World War II, Japan’s fishing industry expanded rapidly. Supported by the government to respond to food shortages, fishing fleets had little regulations to follow, taking fish from the country’s own waters, other nations’ shores, and offshore. With the implementation of exclusive economic zones in the 1970s, Japan had to fall back on exploiting fish stocks in its own territories, resulting in severe overfishing. As recently as 2018, official fishing regulations were revised to provide a more sustainable, quota-driven management of marine resources in Japanese waters.

The modern fishing industry in Japan

Nowadays, more than 2,000 fishing ports are operated across the country’s islands, with marine fisheries showing the highest production output within the sector, followed by marine aquacultures. Inland water fisheries and aquacultures are comparatively minor sub-sectors of the fishing industry, focusing on the production of shellfish and eels.
The majority of catches supply the domestic market with fish and fishery products. Japan houses the world’s largest wholesale fish and seafood market, Tsukiji fish market, which is located in central Tokyo. Most of the country’s fish wholesale markets are located at landing areas, streamlining logistics and, therefore, ensuring freshness.
By implementing innovative technologies, the Japanese government not only strives to improve sustainability and its processes, but also to create new job opportunities within the industry. The number of individuals employed in fishery and fish farm-related professions continues to decrease, while the mean age is rising. Similar to the overall agricultural sector, the fishing industry is struggling to generate interest in younger generations.

Whaling in Japan is based on a long tradition and spiritual connection to aquatic mammals, according to archaeological finds and folklore. While organized whale hunts emerged as early as the 12th century, consumption of whale meat reaches back even further to the Jomon period (14,000 to 300 BCE). Large-scale, industrial whaling, however, only began in the 1980s. Japanese whaling has been carried out since 1988 under Article VIII ('scientific whaling') of the International Whaling Commission’s (IWC) founding treaty. This provided a loophole by allowing the selling of the animals once the research part was carried out to avoid wastage. In 2014, the UN's International Court of Justice determined that Japan's Antarctic whaling was commercial and, therefore, illegal. In response, the Japanese government announced their withdrawal from the IWC to resume commercial whaling in the country's territorial waters at the end of 2018.
Japanese whaling has been a topic of conflict among pro- and anti-whaling groups for many years. Numerous campaigns were launched to protest unregulated whaling, which is seen as the main driver for dwindling whale populations. The country’s long history of whale hunting is frequently used among proponents to justify the resumption of commercial whaling. This again caused criticism from NGOs and individuals, arguing that modern, industrial whaling cannot be compared to the traditional, small-scale whale hunts, which were limited to few coastal regions before the 20th century.

In the following 7 chapters, you will quickly find the 36 most important statistics relating to "Fishing industry in Japan". 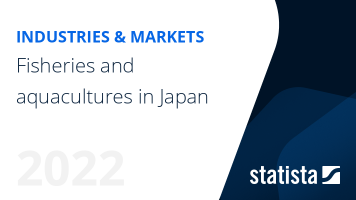 The most important key figures provide you with a compact summary of the topic of "Fishing industry in Japan" and take you straight to the corresponding statistics.