Published by
Martin Placek,
Apr 20, 2022
The trucking industry refers to the use of road transportation, such as semi-trailers and light trucks, to move goods across overland routes. Most commonly goods are transported from manufacturing plants to retail distribution centers, but there are other common uses such as the transportation of building materials and waste in the construction industry. Trucking is responsible for most of the overland freight movement in the United States, with the market being worth 732.3 billion U.S. dollars in 2020. At that time, there were over 902,000 truck drivers employed in the U.S., which is less than the industry requires. Owing to this driver shortage, driver costs are the biggest challenge faced by the industry. Broadly speaking, the U.S. trucking industry can be divided into three main sectors: full truckload (FTL), less-than-truckload (LTL), and couriers.

FTL carriers are those who haul large amounts of homogenous cargo, generally enough to fill an entire semi-trailer or container. Fleets in the FTL sector can be either privately owned, for example by a large manufacturer who needs to distribute their goods, or available on a for-hire basis. For-hire carriers generally offer additional logistics and transportation services, such as intermodal transport options. The largest U.S. FTL carrier by market value was Old Dominion, who in 2020 reported total operating revenue across all operating segments of four billion U.S. dollars. Other prominent FTL carriers are J.B. Hunt and Knight-Swift, who reported over 9.6 billion U.S. dollars and 4.5 billion U.S. dollars in revenue for 2020 respectively.

Conversely, LTL carriers transport shipments that are larger than parcels, but not large enough to fill a full trailer. Many LTL carriers will transport multiple shipments simultaneously to optimize their operations. The largest LTL carrier is FedEx Freight, who in 2020 reported over 7.1 billion U.S. dollars in revenue from LTL shipments. Following FedEx, the next largest carriers are Old Dominion, XPO Logistics and YRC Freight, all of which generated somewhere between 3.5 and four billion U.S. dollars in revenue in that year from LTL shipments.

Finally, the courier sector is comprised of carriers of non-palletized and light goods, such parcels. Three main companies dominate this sector in the United States: the U.S. Postal Service, FedEx, and UPS. Revenues in this sector appear higher than for FLT and LTL: FedEx Express reported almost 32.5 billion U.S. dollars in revenue from package delivery for their 2021 fiscal year, while UPS reported close to 53.5 billion U.S. dollars in revenue from domestic package delivery in 2020. However, not all this revenue can be directly attributed to the courier sector of the trucking industry.

In the following 5 chapters, you will quickly find the 32 most important statistics relating to "Trucking industry in the U.S.".

Statistics on the topic
Total revenue of the U.S. trucking industry
732.3bn USD
Share of freight trucking costs in the U.S. spent on driver wages
34%
Share of trucking companies who consider driver-related costs a challenge
85%

The most important key figures provide you with a compact summary of the topic of "Trucking industry in the U.S." and take you straight to the corresponding statistics.

Logistics industry in the U.S.

Courier, Express and Parcel (CEP) market in the United States 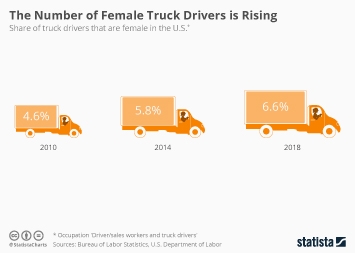