Published by Statista Research Department, Mar 26, 2020
Based on a survey conducted in 2018, 30.4 percent of eligible voters identified themselves as having populist views. Almost 33 percent stated they were non-populist, while nearly 37 percent vacillated between the two. Faced with various concrete statements during other surveys, for instance on national sentiment and chauvinism, almost 37 percent of respondents largely agreed with having the courage to regain a strong national spirit, while roughly 34 percent supported the idea that Germany should energetically assert its national interests over those of foreign countries.
The AfD is Germany's Alternative für Deutschland (Alternative for Germany), a still young right-wing political party. During the parliamentary elections (Bundestag elections) in September 2017, the party won 12.6 percent of votes, thus achieving a first time ever presence in the German parliament, with the AfD share of votes outstripping the liberal FDP and the left-wing Die Linke. Since the founding of the AfD party in 2013, the number of its members has grown, from 17,687 in 2013 to 27,621 in 2017 (with the exception of a drop in 2015). A 2019 survey found that 78 percent of respondents saw the AfD as a threat to German democracy. A year earlier, 53 percent of respondents to another survey had thought that the party would not be successful in the long term.

A variety of further surveys conducted in Germany in recent years attempted to measure various aspects of populism among the population. In terms of general democracy satisfaction levels in Germany, among populism supporters 45 percent were reported to be dissatisfied with how democracy functioned in the country, while among non-populist members of the population the figure stood at 16 percent. Opinions on the development of European integration was also covered, with nearly 80 percent of populist respondents either mostly or completely agreeing that there needed to be "less" Europe in the future. Approximately 30 percent of non-populist respondents had the same view. In general, 32 percent of those surveyed in 2018 agreed that Germany needed stronger protection from the rest of the world.

Where do the media and various institutions stand in Germany in terms of public trust? According to 2018 survey data, 85 percent of the population trusted the police, followed by high trust in the Federal Constitutional Court and the Stiftung Warentest (consumer product testing). Media fared somewhat worse, with 41 percent feeling strong trust and 38 percent less so.

In the following 4 chapters, you will quickly find the 24 most important statistics relating to "Right-wing populism and nationalism in Germany". 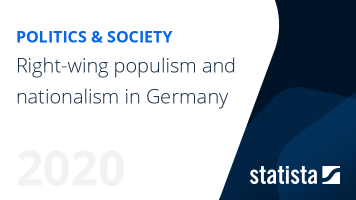 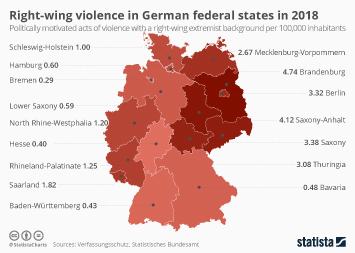