Published by
Lionel Sujay Vailshery,
Feb 7, 2022
Rapid growth in the technology industry has provided people from around the world with countless improvements in convenience, communication, and data access. Business and government spending on information technology products and services worldwide is expected to eclipse 3.7 trillion U.S. dollars in 2021, with the largest component of that growth being software-related. Enterprise software spending has doubled in the decade from 2009 to 2019, eventually amounting to 458 billion U.S. dollars. Although due to the negative economic impact brought by the coronavirus (COVID-19) outbreak, the 2020 software spending decreased by a small margin. The software market will nevertheless remain strong and is expected to register strong growth after the COVID impact, surging to 572 billion U.S. dollars by 2022. One of the software advancements that is currently shaping our world the most is database-related software.

What are Database management systems?

Database management systems (DBMSs) are software applications that allow companies to administrate large databases of information. The most popular among these DBMSs are Oracle, MySQL, and Microsoft SQL Server. Relational DBMSs are the most popular type of DBMSs and are used by the majority of adopters; other DBMS types include document stores, key-value stores, search engines, etc.

The migration to the cloud that has been taking place in the overall software industry also has an impact on the DBMS market. Around half of open source DBMSs are already deployed in the cloud, and database as a service is one of the most widely adopted cloud services. Database-related products and services are also the most common solutions offered on the marketplaces of cloud hyperscalers such as Amazon Web Services (AWS) and Microsoft Azure. Using public cloud platforms to manage databases delivers benefits such as greater scalability, lower cost, and less maintenance.

Many DBMSs are free, open-source technologies such as MySQL and PostgreSQL, but large companies such as Microsoft, Oracle, and IBM also play an important role in shaping the industry. Open source DBMSs have been gaining popularity over the years; as of June 2021, commercial DBMSs and open source DBMSs are almost equally popular among users.

In the following 6 chapters, you will quickly find the 38 most important statistics relating to "Database software". 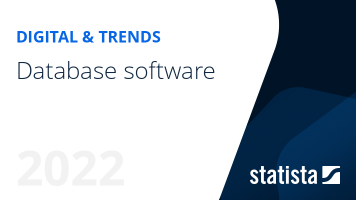 The most important key figures provide you with a compact summary of the topic of "Database software" and take you straight to the corresponding statistics.