The number of left-wing extremists in Germany has also grown across different categories since 2016, amounting to 34,500 in 2019. Of these, 900 were classified as anarchists and 9,200 were considered violence-oriented. The number of left-wing extremist criminal offences recorded in 2019 amounted to 6,449. Of these, 921 were violent. Both figures were lower than the previous year. Of non-violent left-wing extremist criminal offences, the most common type recorded in 2019 was property damage, at 3,520 cases. That same year, among violent acts, the highest number was committed against police and law enforcement at 467.

In the following 5 chapters, you will quickly find the {amountStatistics} most important statistics relating to "Politically motivated crime in Germany".

The most important key figures provide you with a compact summary of the topic of "Politically motivated crime in Germany" and take you straight to the corresponding statistics. 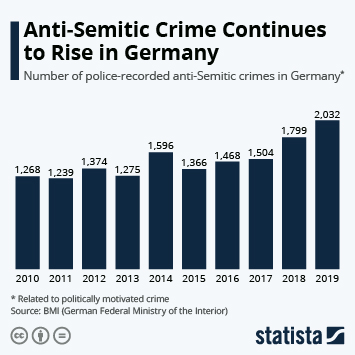