Published by
Aaron O'Neill,
Nov 22, 2022
Located in southern Africa across the Mozambique Channel from Madagascar, Mozambique shares borders with Tanzania, Malawi, Zambia, Zimbabwe, South Africa, and Swaziland - now known as the Kingdom of Eswatini. Mozambique is home to a total population of roughly 29 million people. A long independence struggle against Portugal led to an even longer civil war, which ended in 1992. Since then, the country has struggled to establish itself and develop its economy.
Mozambique's total gross domestic product amounted to nearly 13 billion U.S. dollars in 2017, with a growth rate of nearly 4 percent after inflation adjustment. A significant proportion of the output comes from the agricultural sector, which is not surprising due to the low urbanization rate. This means that growth potential in the country is high because of unrealized output potential. The country imports and exports most with its neighbor South Africa, the Netherlands, and India, and the fairly recent discovery of natural gas should boost these exports in the medium term.

There are also negative economic indicators, however: The national debt exceeds GDP, and the consistently negative budget balance indicates that this debt overhang will be an issue for the foreseeable future. Similarly, Mozambique is one of the countries with the lowest GDP per capita in the world, indicating a low level of development. Inflation and unemployment are also high at the moment. The outlook for the Mozambican economy may be good, but current conditions are not.

This lack of development is also reflected in demographic statistics; life expectancy at birth has only risen to 58 years, and the infant mortality rate also remains high. Even mobile phone subscriptions are low, preventing the kinds of technological advancements that have revolutionized banking in places like Kenya. With a young age structure, the optimal scenario is that Mozambique’s youth will take advantage of the economic growth and natural gas wealth to develop the country.

In the following 4 chapters, you will quickly find the 39 most important statistics relating to "Mozambique". 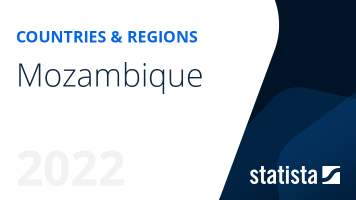 The most important key figures provide you with a compact summary of the topic of "Mozambique" and take you straight to the corresponding statistics.