Published by
Aaron O'Neill,
Apr 1, 2021
Portugal is the westernmost country of mainland Europe and makes up the Iberian Peninsula together with Spain and Andorra. The Portuguese Republic consists of continental Portugal and two archipelagos located in the Atlantic, Azores and Madeira. For approximately half of the twentieth century, Portugal was a dictatorship under the command of Antonio de Oliveira Salazar. This period ended in 1974, when a coup known as the “Revolution of the Carnations” ushered in a new democracy. Twelve years later, Portugal joined the European Union and is now a member of the United Nations, the euro zone, OECD, NATO, WTO, OSCE, and Council of Europe.
Portuguese is one of the most spoken languages by native speakers in the world nowadays, with over 220 million native speakers. Of these native speakers worldwide, around 10.3 million live in Portugal today, with the majority living in the capital and largest city, Lisbon.

Over the past decade, there has been a decline in the fertility rate in Portugal and an increase in the average age of the population - trends which have become more distinct after the global financial crisis of 2008, which left Portugal under expanding debt and a budget deficit which is only slowly recovering. In 2011, after the country asked international lenders for emergency assistance, a 78 billion euro bailout was awarded on the condition that Portugal must reduce its budget deficit to the EU target of around 3 percent of GDP. Progress was made and in 2015, after the country managed to reduce the budget deficit to just over 4.3 percent, the country exited the program.

After years of economic failure, Portugal’s economic boost entails an estimated increasing GDP and GDP per capita for the upcoming years. A decrease in inflation in comparison to the previous year led to deflation in 2014, but the inflation rate seems to recover and stabilize itself. Finally, an increase in the export of goods to Spain, Portugal’s most important export and import partner, have led Portugal on its way to economic recovery. Today, Portugal seems to be on the upswing.

In the following 4 chapters, you will quickly find the 42 most important statistics relating to "Portugal".

The most important key figures provide you with a compact summary of the topic of "Portugal" and take you straight to the corresponding statistics. 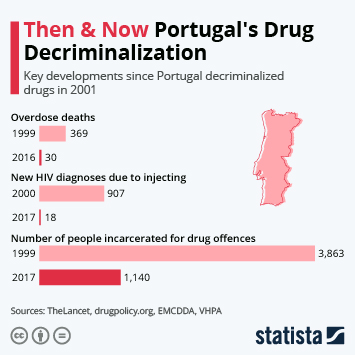