Published by
Shangliao Sun,
May 2, 2022
The railway sector in India was the third largest in the world and run by the public sector. The train-system was founded in the 19th century, when the first passenger train took about 400 people from Mumbai to Thane for a 1.6 kilometer journey. In 1895, the country started building its own locomotives. Steam engines were soon abandoned, and electric locomotives took over. The Indian railway witnessed a booming period after independence, which saw modernization of the whole railway system.

More than 13 thousand passenger trains were in operation employing over 1.2 million Indians, and they got named based on their everyday operations. Duronto ‘the restless’, was one of the fastest trains in the country, Rajdhani ‘the capital’ connected state capitals and the national capital region of Delhi, while the Garib Rath ‘the poor man’s chariot’, was an economical alternative for long distance travel. Trains were essential to all Indians, regardless of whether they were cross-region, between cities or within a metropolis. Ordinary working expenses in financial year 2021 for the system amounted to more than 1.4 trillion Indian rupees. The Gorakhpur Junction railway station had the world’s longest railway platform while the Ghum station with the Toy Train route was the highest station in India to be reached by a steam locomotive. The luxury train, Palace on Wheels became a major tourist attraction in Rajasthan due to its majestic experience. However, ageing infrastructure and the slow pace of new project execution were the major obstacles that India’s railway system encountered, comparing to its international counterparts.

The railway system thrives on metros and monorails running within cities to meet the rapid rise of urban population. It was estimated that they would raising investments of over 124 million dollars between 2018 to 2022. Most of the metro systems were owned and operated by local state and municipal governments. In 2021, the Indian government rolled out policies to raise the share of public transport in urban areas through expansion of metro networks and city bus services.

In the following 4 chapters, you will quickly find the 24 most important statistics relating to "Railway industry in India".

The most important key figures provide you with a compact summary of the topic of "Railway industry in India" and take you straight to the corresponding statistics.

Road and rail infrastructure in India 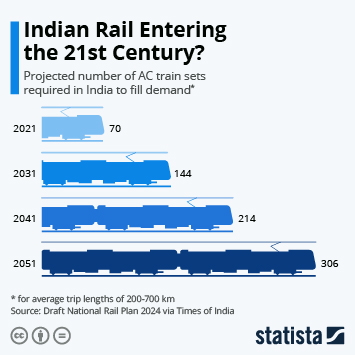