Published by
Shangliao Sun,
Dec 1, 2022
Many countries across the globe now rely on water transport, specifically for bulky and large cargo shipments as a cheaper, and reliable means of transportation. The south Asian country of India, however, has yet to develop this mode of travel to its full capacity. Both cargo and passenger transport within the country has been dominated by road and railway networks.

Over 60 percent of the freight was carried through Indian roads. Inland water transport on the contrary, accounted for less than one percent of the freight traffic. In 2019, the freight movement by road transport amounted to around 2.7 trillion metric tons per kilometer. The volume of cargo handled across the Indian ports in financial year 2021, however, was around 1.25 billion metric tons. This heavy dependence on road and rail transport has had its implications. Due to the time and uncertainties involved with road and rail freight movement, logistics costs were estimated to account for about 13 to 14 percent of the nation’s GDP. Waterways in India have a tremendous potential to develop into leading logistics arteries across the country. Passenger traffic at Indian ports follows the same pattern as cargo. The passenger traffic at major Indian ports was a mere 710 thousand, in comparison to around 22.6 trillion passengers per kilometer on roads and over eight billion in railways.

The government has been making efforts to develop the domestic water transportation further. Overall, almost two thousand water ports were expected to be set-up. The infrastructural development in the port sector however could face certain challenges. Due to the increased congestion of settlements along riverbanks and intense pressure from industrial and agricultural requirements, the river depths have gone down drastically over the recent years. For the ports to survive, the rivers should be able to maintain a certain flow-depth, which has also been altered by the increasing number of dams up-stream. For uninterrupted functioning, a constant year long river depth of two meters would need to be maintained. This could likely be a daunting task given the government has a shortage of plans and policies for the judicial use of river waters. The development on water transport is still in its preliminary phase in India. With over 14 thousand kilometers of navigable waterways, the potential for the development and efficient use of rivers for freight and passenger transport is tremendous. With proper infrastructure development, aided with the right initiatives and incentives from the government, this sector could unleash more potential.

In the following 6 chapters, you will quickly find the 32 most important statistics relating to "Water transportation in India". 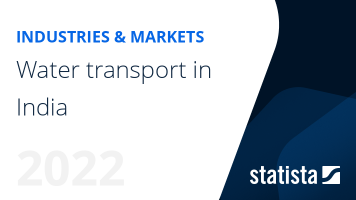 The most important key figures provide you with a compact summary of the topic of "Water transportation in India" and take you straight to the corresponding statistics.