Published by D. Gorka, Mar 16, 2022
More than one fourth of global motorcycle sales are attributable to the Japanese Big Four. Honda, Yamaha, Suzuki, and Kawasaki constitute the core of the Japanese motorcycle industry. The industry, however, does not produce its bikes in Japan for the most part. The domestic production of bikes pales in comparison to Japanese brands’ production abroad. For Japan, motorcycles are primarily an export product. The ones manufactured in Japan are typically shipped to North America or Europe. While many domestically-produced machines have an engine displacement above 250 cubic centimeters, Japanese residents mostly ride mopeds of up to 50cc engines.

Motorcycle categories and their licenses

The relevant law for motor vehicle licenses in Japan is the Road Traffic Act. It distinguishes between motorized bicycles, ordinary two-wheelers, and large two-wheelers. Under this law, motorized bicycles have an engine of 50cc or under. As it is the lowest motor vehicle category, almost any other driver’s license includes it. Ordinary two-wheelers are the next-higher category with an engine displacement between 51cc and 400cc, including the restricted license version of small ordinary two-wheelers (51cc to 125cc). Any motorcycle above 400cc requires a large two-wheeler license. It is the only two-wheeler license where the driver needs to be 18 years old; the others are obtainable from 16 years of age.
Since any of the mentioned licenses but motorized bicycles have automatic transmission versions, Japan knows seven different motorcycle licenses in total, catering to various types of vehicles and drivers. Despite the diverse options, license holders of all the three major motorcycle categories have decreased in recent years.

Nowadays, user demographics suggest that Japanese motorcyclists are aging, yet fewer young people intend to purchase motorbikes, resulting in an overall decrease of motorcycles in use. At the same time, environmental awareness is spreading among consumers in Japan. Consequently, motorcycle usage for recreational purposes is expected to decrease, possibly affecting sales and thus the dominance of Japan’s Big Four. While the domestic demand for motorcycles continues to stagnate, consumers have increasingly turned to bicycles. Sales of electric power-assist bicycles, also known as e-bikes, have surged in recent years. Moreover, the growing popularity of bicycles and bike-sharing services, combining convenience and environmentally conscious behavior, might prompt a shift within the motorbike industry.

In the following 7 chapters, you will quickly find the 27 most important statistics relating to "Motorcycle industry in Japan".

Statistics on the topic
Number of motorcycles in use
10.35m
Most owned motorcycle type
Moped (50cc and under)
Number of moped license holders
877.66k

The most important key figures provide you with a compact summary of the topic of "Motorcycle industry in Japan" and take you straight to the corresponding statistics. 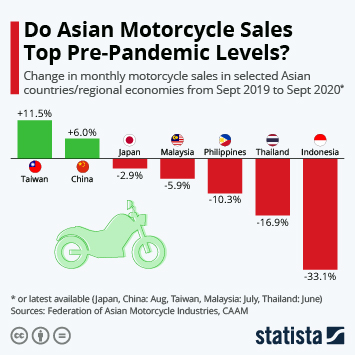