Passenger transportation in Japan is dominated by the railway network. However, in order to reach the nearest train station for their daily commute, many Japanese rely on bicycles. Besides office workers on the go, in particular, bikes are popular among female homemakers and students commuting to school or running daily errands.

Which kinds of bicycles are popular in Japan?

The most common two-wheeler category found among Japanese cyclists was the so-called mamachari, a general utility bicycle, often equipped with a basket and up to two child seats. As of 2021, e-bikes were the third most popular bicycle type, with around 10 percent of bicycle buyers in Japan opting for pedal electric assist cycles (pedelecs).
Pedelecs attract many elderly consumers, who benefit from less physical strength needed for navigating their daily life on a bicycle. Sales figures for e-bikes in Japan have kept growing over the past years, reflecting an ongoing demand not only among elderly consumers but a more general target group.
While Japan’s overall production volume of bicycles displayed a downward trend in recent years, bicycle imports have offset this decline. Another factor contributing to bicycle demand is the transportation sharing market in Japan: In recent years, an expanding number of Japanese cities have authorized the launch of bicycle-sharing services, making alternative and budget-friendly mobility options more accessible.

Safety is a leading concern

With the increased availability of bicycle riding options, safety has become a vital issue. More than 60 percent of Japanese cyclists claimed to have experienced near misses while riding a bike. Most bicycle accidents in Japan were caused by road users negligent towards the traffic situation. However, the  number of accidents involving bicycles has decreased within the past decade overall. While helmet use is optional in Japan, leading to a high share of head injuries among bicycle casualties, the country has established a nationwide mandatory registration process for bicycles, with local governments progressively enforcing compulsory liability insurance for cyclists.
This text provides general information. Statista assumes no liability for the information given being complete or correct. Due to varying update cycles, statistics can display more up-to-date data than referenced in the text.
Alexandru Arba
Research expert covering Japan
Get in touch with us now
Published by Alexandru Arba, Oct 15, 2022

Share of new bicycles sold in Japan 2021, by type 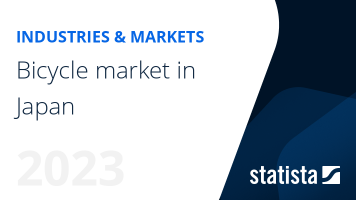 The most important key figures provide you with a compact summary of the topic of "Bicycle industry in Japan" and take you straight to the corresponding statistics.