Despite playing an important role in the global market and the economy of countries like Brazil, Mexico, and Venezuela, the oil industry in Latin America has seen better days. The region is home to nearly one fifth of global oil reserves, ranking only behind the Middle East in terms of volume. Yet, in 2021, it accounted for less than ten percent of the oil production worldwide, a share which has been consistently declining in the past decade.

Owning reserves adding up to nearly 13 billion barrels – the second largest in Latin America – Brazil is by far the leading crude oil producer in the region. After the discovery and early exploitation of deep offshore reserves known as pre-salt between 2010 and 2014, Brazil's annual oil production has since experienced a mostly upward trend, reaching three million barrels per day (slightly below the output reported by Iran). Petrobras, the national oil corporation, is not only the largest in the region, but was also one of the most profitable oil and gas companies in the world as of 2022.

Meanwhile, Mexico faces a different situation, in spite of ranking second in Latin America and twelfth in the world in terms of crude oil production. Pemex, the state-owned company which once had exclusive rights over oil production and distribution in the country, has experienced a major production crisis in the past few years. Since 2019, the company’s crude oil output has remained below 1.8 million barrels per day, a decrease of over 30 percent when compared to a decade earlier.

Even more critical, Venezuela – which holds the largest oil reserves in the world – has seen its oil production decline by more than 80 percent in the past ten years. In fact, the once oil titan has recently lost its long-standing position amongst the top three Latin American oil producers, surpassed by Colombia. In addition, increasing economic sanctions have had a negative impact in the country’s oil exports, especially to the U.S. Nevertheless, the impact on revenue from a declining oil export volume might be at least somewhat counterbalanced by soaring crude oil prices in the aftermath of Russia's invasion of Ukraine.
This text provides general information. Statista assumes no liability for the information given being complete or correct. Due to varying update cycles, statistics can display more up-to-date data than referenced in the text.

Bruna Alves
Research expert covering energy and environment
Get in touch with us now
Published by Bruna Alves, Aug 5, 2022

Country with largest oil reserves in the world
Venezuela

Crude oil production in Latin America & the Caribbean 2021, by country

Number of oil and gas rigs by world region October 2022 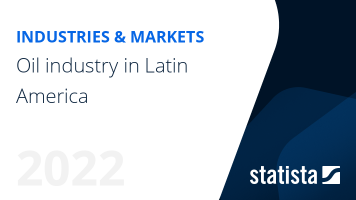 The most important key figures provide you with a compact summary of the topic of "Oil industry in Latin America" and take you straight to the corresponding statistics.