Singapore's success in the modern shipping trade began in the early 19th century and led to one of the busiest transshipment hubs in the world. Singapore is perceived to be the second largest container port in terms of cargo tonnage and is only surpassed by Shanghai. The port handled about 37.48 million TEUs (Twenty Foot Equivalent Unit) in 2021, indicating only a slight increase compared to 2020 despite the global recession due to COVID-19. In addition, there were over 4.91 thousand vessels sailing under the flag of Singapore as of November 2020.

While Singapore’s geographical location on the Strait of Malacca has been favorable, its preeminence as a global port was not by chance alone. The decision to build the first container terminal in Singapore was taken in 1969. Back then, there was no other container port in Southeast Asia. Since then, the port’s throughput has been growing steadily. While the bunker sales amounted to around 42.69 million metric tons in 2012, they reached almost 50 million metric tons in 2021. In that same year, about 24.34 thousand tankers arrived in Singapore, from which almost 17.6 thousand were loaded with oil and about 2.34 thousand with LNG and/or LPG. The port of Singapore has played a significant role in its economy and over the past decades it has supported Singapore in achieving a high level of economic development in only one generation.

The Singaporean port is managed by PSA international Pte Ltd, one of the world’s largest port operator. The institution was founded in 1913 under the name “Singapore Harbour Board” and has always been a constant factor in the development of the port. PSA worked under the Singapore government until 1997, when it was transformed into an independent trading company by a parliamentary bill. Since then, the port operator has had a stake in various ports all over Asia and the world. PSA’s international revenue amounted to 4.67 billion Singapore dollars in 2021, and they owned assets worth over 23.67 billion Singapore dollars.

The port is facing a challenging future

The port and shipping industry are integral to Singapore’s economy; thus, they must ensure the port’s position in the Southeast Asian region. These efforts could face some competition in the future: Indonesia and Malaysia are both planning to invest in larger container ports, and China might soon be able to trade on the arctic route, due to climate change opening up this region. However, Singapore’s geographical position is still its biggest asset, and if they keep up with infrastructure and technology, there is a high chance of remaining the largest transshipment hub in Southeast Asia.
This text provides general information. Statista assumes no liability for the information given being complete or correct. Due to varying update cycles, statistics can display more up-to-date data than referenced in the text.
Published by Statista Research Department, Sep 8, 2022

Singapore's ranking among the largest ports in the world
Second

Size of container ship fleet 2022, by nationality of operator 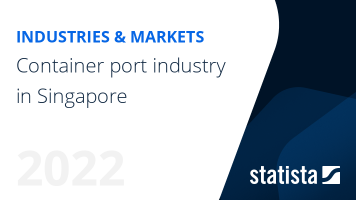 The most important key figures provide you with a compact summary of the topic of "Container port industry in Singapore" and take you straight to the corresponding statistics.