The aviation industry is a significant contributor to the Singapore economy. Singapore's Changi Airport has been consistently ranked as one of the best airports in the world and offers a variety of shopping and food options for travelers. Before the pandemic, in financial year 2019/20, Changi airport had a revenue of about three billion Singapore dollars, whereas the revenue in 2020/21 fell below 700 million Singapore dollars. Revenue has recovered slightly in 2021/2022 but remains well below pre-pandemic levels.

However, the COVID-19 outbreak has had a massive impact on the global aviation industry. Most of the air traffic has collapsed and Singapore has not been spared either. As of December 21, 2020, the flight frequency fell to an average of minus 89 percent compared to the previous year. This development naturally had an impact on Changi Airport itself, as well as on Singapore airlines. The number of passengers carried by Singapore Airlines amounted to about 460 thousand in fiscal year 2020/21, down from around 21 million in 2019/20.

Since the pandemic, Singapore Airlines has strengthened its regional dominance, while its competitors have received more modest public support and are still restructuring. Indeed, SIA has been strongly supported by the state-owned investment company Temasek Holdings. In addition, the group has benefited from the country's response to the pandemic, as Singapore was one of the first countries in the region to reopen its borders. Since the beginning of 2022, SIA has begun to restore its network, which now reaches 93 destinations in 36 countries. This allowed Changi Airport to record 3.3 million passengers in July 2022, with air traffic steadily increasing since the end of 2021. The airport will also resume operations from Terminal 4 in September as travel recovery rates accelerate after a shutdown of over two years.

With the gradual recovery of air traffic, sustainability remains a priority for Singapore's aviation sector. The sector's decarbonization strategy, guided by CAAS and the Ministry of Transport, aims to achieve net zero carbon emissions by 2050. To achieve this, SIA replaced its cargo aircraft fleet with next-generation Airbus A350s in February 2022, which consume 40 percent less fuel than previously operated Boeings. The Singapore Airlines Group expects to be able to significantly reduce its emissions through the continuous renewal of its young fleet.
This text provides general information. Statista assumes no liability for the information given being complete or correct. Due to varying update cycles, statistics can display more up-to-date data than referenced in the text.
Published by Statista Research Department, Sep 26, 2022

Number of passengers at Changi Airport in Singapore 2014-2021

Number of passengers carried by Singapore Airlines in FY 2021/22
3.39m

Number of passengers at Changi Airport in Singapore 2014-2021 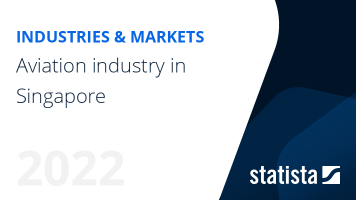 The most important key figures provide you with a compact summary of the topic of "Aviation industry in Singapore" and take you straight to the corresponding statistics.