The main passenger transport in Singapore comprises of the public bus, train system and taxis. A major form of transportation is rail: The Mass Rapid Transit (MRT) which now has more than 130 stations across five lines, and the Light Rail Transit (LRT) with 41 stations across two lines. The bus system is currently operated by four companies offering different types of transport services such as midnight bus service and feeder bus services that connects passengers within an estate. Currently, there are seven taxi operators, and the taxis can be flagged along the street, at designated taxi stands or booked online.

In 2021, an average of 5.3 million passengers a day used public transport in Singapore. Compared to the previous year, this value slightly increased, with public transit use recovering with the easing of COVID-19 restrictions. To pay for public transport, commuters in Singapore have the option to use contactless cards. With that and the penetration of mobile applications, the last decade was characterized by easy access to the system and accurate travel information for everybody.

An average of about two million passengers a day used the Mass Rapid Transit (MRT) in Singapore, while of approximately 151 thousand passengers a day used the Light Rail Transit (LRT). Passenger capacity and breakdowns on the MRT in recent years have been mitigated with the roll-out of government-owned buses as part of the Bus Service Enhancement Programme. Furthermore, the Government took over all public transport assets, and improved signaling systems for trains to run at closer intervals. Three stations in the north of the island on the Thomson-East Coast MRT Line began operation in January 2020 and 11 new stations will begin operating in the second half of 2022.

ComfortDelGro had the biggest taxi fleet in Singapore at around 6.6 thousand taxis. The company’s global operations span seven countries – Singapore, Australia, China, the United Kingdom, Ireland, Vietnam and Malaysia. Taxi companies in Singapore have also partnered with other ride-hailing apps. In 2021, Gojek launched GoTaxi, to give commuters access to taxis directly through the Gojek’s ride-hailing platform.

Car sharing apps are also gaining traction in Singapore with the advent of more companies in the industry. Currently, the market leader is BlueSG with around 650 shared electric vehicles (EVs) in use. Additionally, the peer-to-peer car-sharing platform called ‘Drive lah’, allows private car owners to rent out their vehicles in Singapore. The industry experienced a boom after restrictions were lifted in June 2020 resulting in an increasing revenue for almost all car sharing providers in Singapore. Overall, the Singapore car-sharing industry is expected to reach a revenue of about 217 million U.S. dollars by 2027.
This text provides general information. Statista assumes no liability for the information given being complete or correct. Due to varying update cycles, statistics can display more up-to-date data than referenced in the text.
Published by Statista Research Department, Jul 18, 2022

Average number of passengers using the MRT per day in Singapore
ca. 2.1mn 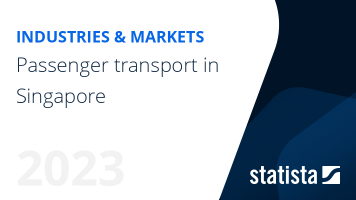 The most important key figures provide you with a compact summary of the topic of "Passenger transport in Singapore" and take you straight to the corresponding statistics.