Published by Jang Seob Yoon, Aug 31, 2020
The demographic structure of South Korea has undergone major changes in the last few decades. After the Korean War in 1950, the population increased rapidly until the 1990s. However, the birth rate has remained low for the past decade and the population growth rate is less than one percent. The aging population is also a major social issue, and the average age of South Korea is expected to steadily increase in the coming decades. As of 2018, Korea had a population of approximately 56.4 million. This, combined with the small size of the country, means that Korea is one of the most densely populated countries in the world.
There are two possible factors that lead to demographic changes: a low birth rate and an aging population. Over the years, Korean life expectancy has increased from less than 80 years to almost 83 years, but the birth rate has dropped to the lowest rate of 1.05 births per woman. There were about 303 thousand newborns in 2019, the lowest of the decade. Despite the government spending billions of dollars to raise birth rates, it did not achieve the desired effect. At the same time, the proportion of people over the age of 65 continued to grow. The elderly population is projected to grow by 50 percent by 2025.

Family structure has changed over the years. Forty years ago, the average household size in Korea was more than four, but at present, the average household size is 2.4. Surprisingly, single households made-up the largest share of total households. This was mainly due to an increase in the number of young people who postponed marriages and chose to live alone. On average, one household spent about 26 million South Korean won per year, and the food and beverage sector was the largest consumer sector, excluding taxes and insurance.

Korea is becoming more economically active every year. In 2019, 28 million people were economically active, of which around 70 percent were in the services sector. The employment rate of South Korean men has consistently been about 71 percent, while the employment rate of women has been slowly increasing to reach 51 percent. The minimum wage per hour was 8,350 South Korean won, double that of 10 years ago. In addition to the youth employment policy, the government is raising the minimum wage to ensure the basic lives of young people.

In the following 6 chapters, you will quickly find the {amountStatistics} most important statistics relating to "Demographics of South Korea".

The most important key figures provide you with a compact summary of the topic of "Demographics of South Korea" and take you straight to the corresponding statistics. 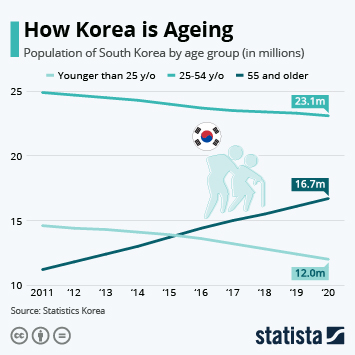 population of Korea by age group