One of the most well-known players in the RTA furniture market, Swedish furniture retailer IKEA recorded nearly 40 billion euros in sales in financial year 2020. Europe had a total of 279 IKEA stores throughout the continent, while North America had 67 as of 2019. Within the United States, IKEA is the top shopping destination for furniture. Most of IKEA's sales come from bedroom and bathroom products.

Consumers often buy ready-to-assemble furniture in the context of renovating their home, perhaps because of the shared do-it-yourself spirit seen in RTA products and home improvement projects. Potential purchasers strongly value an RTA piece's level of quality and look for products that are typically affordably priced. Consumers expect to pay less than 100 U.S. dollars for most RTA furniture products.

In the following 4 chapters, you will quickly find the 27 most important statistics relating to "RTA Furniture in the U.S.". 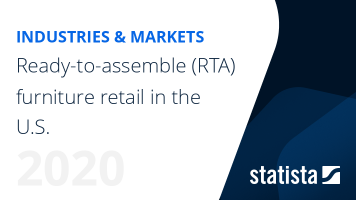 The most important key figures provide you with a compact summary of the topic of "RTA Furniture in the U.S." and take you straight to the corresponding statistics.

Office Furniture in the U.S.