Public transportation is a service that has not been able to keep up with the exponential growth of cities in India. Continuous infrastructure developments and increasing road networks have forced the citizens to resort to personal vehicle purchasing, that has made the existing congestion crisis in the south Asian country even worse. In the top ten Asian cities with the most traffic gridlocks, India was most often featured. Solutions to the public transport crisis continues to be a matter of pressing concern. To transition the Indian population from the use of personal vehicles to public transport, the latter would require efficient planning and generous investments to get the infrastructure into place. The investments, however, have not been prioritized as even the busiest of the metro-networks do not generate profit for the authorities. Private vehicles, therefore, continue to thrive on Indian roads.

In fiscal year 2021, over three million passenger vehicles were produced across India. The production volume reached four million in fiscal year 2018 within the segment. The majority of the produced units were sold domestically. Small and mid-sized cars dominate this market. Hatchback crossovers and compact SUVs have gained immense momentum in the past few years in the passenger vehicle segment.

In 2021, SUVs had a share of about 38 percent in passenger vehicles sales across India. The boost in sales came by combining the comfort and feasibility of SUVs to relatively small chassis of hatchbacks to create the perfect blend for roads in India in terms of maneuverability, size and practicality of the vehicle. Maruti Suzuki was the leading passenger vehicle manufacturer with the highest market share in the passenger vehicle segment. The competition has increased with the arrival of Kia and MG to the Indian market.

The recession that started late in 2018, however, had severe impacts on the domestic passenger vehicle industry in India. Several factors including price hikes in fuel and interest rates, insurance and emission standards in combination with the economic slowdown created several headwinds for the segment. The impact was further prolonged by the coronavirus pandemic. 2020 was the worst year for the passenger vehicle industry in India so far where the market size was reduced to 2013 level. Profitability in the sector presumably will not start until the economy has been stabilized. Being a discretionary spend, new-car purchases are most likely to suffer with the economy. For the need-based buyers, used car markets could become the more optimal solution.
This text provides general information. Statista assumes no liability for the information given being complete or correct. Due to varying update cycles, statistics can display more up-to-date data than referenced in the text.
Shangliao Sun
Research expert covering India
Get in touch with us now
Published by Shangliao Sun, Jan 21, 2022 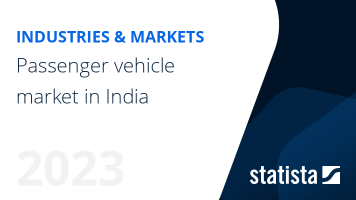 The most important key figures provide you with a compact summary of the topic of "Passenger vehicles in India" and take you straight to the corresponding statistics.