Published by
Shangliao Sun,
Mar 15, 2022
The automotive industry in India has come a long way from the 1950s when the annual production of vehicles was limited to 40 thousand. Early stages of production were confined to the three leading manufacturers – Hindustan Motors, Premier Automobiles and Standard Motors. Expertise in the automotive sector was by and large attained through trial and error in the early stages. Through the decades, the country emerged an important part in the global automotive industry - fourth largest in the Asia-Pacific in 2020.

In financial year 2020, the gross value added from the road transportation sector was the highest across India at around 4.32 trillion Indian rupees. Expansion of road network coupled with sustained economic development, led to a rapid increase in the total number of vehicles across the subcontinent. The sector includes two-wheelers, trucks, cars, buses, three-wheelers and more that play a crucial role in economic development of the country.

In terms of progress, the growth has been immense. The country had produced around 23 million vehicles in financial year 2021. India was the largest producer of two and three-wheelers across the globe. Hero MotoCorp was the leading two-wheeler manufacturer. The market of passenger vehicle was dominated by Maruti Suzuki with a share of over 50 percent in the segment. The company became the only manufacturer to sell over 20 million passenger vehicles cumulatively. Meanwhile Tata Motors held a strong command of over 40 percent in the segment of commercial vehicle.

The problem of decreasing air quality and increasing congestion has been a cause for concern within the automotive industry. India featured repeatedly in the list of most traffic congested as well as most polluted cities in the world. The government took a number of measures to deal with the increasing pressure from NGOs and environmental groups. New emission standards were released and the taxes on electric vehicles were reduced by a good margin as opposed to conventional vehicles. With India on its way to overtaking China to become the most populated country, the amount of traffic on narrow, partially developed roads could likely be a constant grapple. The increasing number of vehicles has indeed been an indicator of a burgeoning middle class, but sustainability is the need of the hour and it remains to be seen how much this aspect will help India’s automotive sectors.

In the following 5 chapters, you will quickly find the 28 most important statistics relating to "Automotive industry in India".

The most important key figures provide you with a compact summary of the topic of "Automotive industry in India" and take you straight to the corresponding statistics. 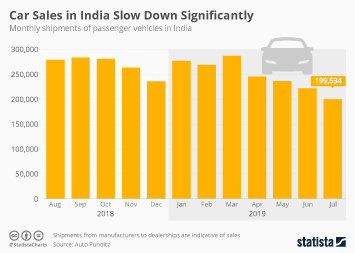