Published by Statista Research Department, Jun 6, 2021
In the United Kingdom (UK), there are several spatially distinct sport associations. Some cover all of the UK, others one of the four constituent countries, and those which cover a collation of these countries, typically either Great Britain or ‘England and Wales’. There are also a number of All-Ireland sports associations that cover both Northern Ireland and the Republic of Ireland, for example Irish Rugby. In addition to the diversity of the individual coverage of the various governing bodies, there is also substantial variety on the range of sports covered by a sport association, with UK Sport exhibiting the greatest diversity, being the governing body for all associations.
UK Sport is also responsible for investing in Olympic and Paralympic sport in the country. UK Sport currently invests approximately 345 million British pounds into the summer Olympic and Paralympic sports through grants distributed across a variety of sports’ national governing bodies. These sport associations hope to improve, maintain and provide sporting opportunities across the UK and promote participation. The sport with the highest amount of Olympic funding received by UK Sport for the Summer Olympics in Tokyo 2020 was rowing, with a sum of roughly 30.5 million British pounds, followed by cycling, with approximately 29.6 million British pounds.

In correlation to UK Sport there a several other sport associations that transcend individual disciplines and govern individual associations of the four constituent countries of the UK, Sport England, Sport Wales, sportScotland and Sport Northern Ireland, and UK Anti-Doping (UKAD). UKAD was formed as an independent body in November 2009. It is responsible for both the planning and implementation of anti-doping program, ensuring all sports bodies in the UK comply with the World Anti-Doping Code.

In the following 5 chapters, you will quickly find the 58 most important statistics relating to "Sport associations in the United Kingdom (UK)". 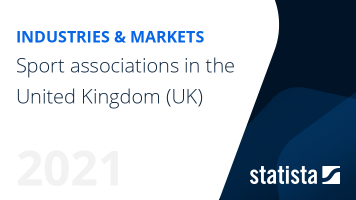 The most important key figures provide you with a compact summary of the topic of "Sport associations in the United Kingdom (UK)" and take you straight to the corresponding statistics.