Published by Statista Research Department, Jun 3, 2021
Sport in the United Kingdom (UK) is managed by the organisation UK Sport, which distributes governmental resources for supporting Olympic and Paralympic athletes, funding participation and improving the quality of various sports throughout the nation. Funding and grants are distributed among a variety of National Governing Bodies (NGAs). These sport associations come up with strategies to improve, maintain and provide sporting opportunities and regulate club memberships in the UK. The sport with the highest amount of Olympic funding received by UK Sport for the Summer Olympics in Tokyo 2020 was rowing, with a sum of roughly 30.5 million British pounds, followed by cycling, with approximately 29.6 million British pounds.
Rugby union, golf, football and tennis are among the most popular sports of the general population in the UK. Two million people in England alone play football at least twice a month. Overall, approximately 40.7 percent of male adults and roughly 31.7 percent of female adults participate in sports on a weekly basis. Roughly a third of the population enjoys water sport at least once a year, and swimming as well as football are the most popular sports among children and adolescents in England.

The most-watched sport even on television in 2020 in the UK was the Six Nations Chmapionship match England vs Wales, with 7.6 million people tuning in, and the most watched commercial non-public service broadcasting sport program was the UEFA Champions Leage final between Paris Saint-Germain andFC Bayern Munich, with 2.86 million viewers.
When it comes to household expenditure, most consumers spend less than 100 British pounds on sports equipment (excluding sports clothing) annually, but roughly 45 thousand consumers in the UK spend more than 500 British pounds.

In the following 7 chapters, you will quickly find the 37 most important statistics relating to "Sports in the United Kingdom (UK)".

The most important key figures provide you with a compact summary of the topic of "Sports in the United Kingdom (UK)" and take you straight to the corresponding statistics. 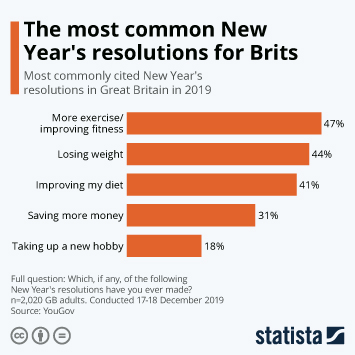