Published by Statista Research Department, Apr 20, 2022
A person is defined as a refugee if they have to flee their home country because of a well-founded fear of persecution or violence, according to the UN Refugee Agency. The persecution may occur due to race, religion, nationality or political opinion. The violence may be ethnic, tribal or religious, but it can also peak as war. For these reasons, refugees cannot return home. If they seek sanctuary in another country by applying for asylum, which includes legal protection and financial assistance from the government of said country, they become asylum seekers. International refugee law is governed by the 1951 Geneva Convention, expanded by the 1967 Protocol for refugees worldwide.
Germany saw an annual increase in the total number of asylum applications from 2010 onwards, with figures highest in 2016. This can be traced back to an influx of migrant arrivals to the country during 2015 to 2016. War violence in countries such as Syria and Afghanistan, to give just two examples, led both individuals and families to flee their homes in search of safety in Europe. Precisely on the way to desired protection and security, migrants often faced dangerous and physically demanding travel routes, especially if they trusted smugglers.

Currently the German state of North Rhine-Westphalia has the most first-time asylum applications, followed by Bavaria and Lower Saxony. Decisions regarding asylum applications in Germany are regulated by the Federal Office for Migration and Refugees (Bundesamt für Migration und Flüchtlinge or BAMF). These decisions include granting legal status as a refugee, subsidiary protection and rejection. As of 2022, most of those applying for asylum in Germany were from Syria, Afghanistan and Iraq.

While the number of refugees arriving in Germany may change depending on developments both in their home countries and German, as well as European, asylum procedures, the situation is a long-term one and requires budget planning from the government for several years ahead. This has already been put in place, with expenditure including various aspects. Among them, ongoing financing for constantly necessary admission and registration procedures, as well as support for German states and municipalities accommodating refugees.

In the following 5 chapters, you will quickly find the 29 most important statistics relating to "Refugees and asylum in Germany".

The most important key figures provide you with a compact summary of the topic of "Refugees and asylum in Germany" and take you straight to the corresponding statistics.

Migration routes via Italy to Europe 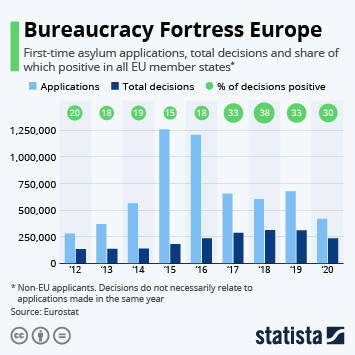